When your plane hits turbulence, it can be pretty scary — although it’s not as likely to cause a crash as it may seem at that moment. Severe turbulence is dangerous for injuries incurred as passengers are tossed about the cabin, but beyond that, it’s more unnerving than anything. Now a new study published in Advances In Atmospheric Sciences by atmospheric scientist Paul Williams of Reading, PA, suggests things may be about to get much worse on winter flights along at least one travel route — the one that crosses the North Atlantic between North America and Europe — thanks to climate change.

Williams’ forecasts are based on the expectation that CO2 levels will continue rising at the rate they have so far, and his predictions describe what he foresees as conditions we should expect by the middle of this century. He finds that the areas along the route prone to turbulence are about to grow in size, with increases varying by the severity of the turbulence.

• severe turbulence are likely to expand by 149%, although he admits it could really be anywhere from a 30% increase to a 188% increase.

• moderate-to-severe turbulence will grow by 129%.

• moderate turbulence will grow by 94%.

• light-to-moderate turbulence will grow by 75%.

• light turbulence will grow by an average of 59%.

This is the second study by Williams, following up on a 2013 study published in the Journal Nature Climate Change by Williams and Manoj M. Joshi of the University of East Anglia. That earlier study looked only at moderate-to-severe turbulence.

21 different wind-related indicators related to turbulence were examined in the new study, including wind speed, and change in the direction of air flow.

Williams’ chose to focus on the North Atlantic because it’s a highly traveled route, and specifically on winter turbulence because that’s when the phenomenon is most prevalent. 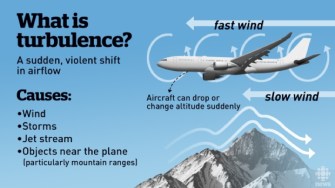 It’s not at all clear if Williams’ predictions for the North Atlantic apply to other areas of turbulence around the globe. According to an email sent by Isla Simpson, a scientist at the National Center for Atmospheric Research, to the Washington Post, “Regional variations of this increase may be quite uncertain, particularly in the higher latitudes where other aspects of circulation change that are less well understood and more model-dependent may dominate.”

Williams points out that, although it may occur over a larger area, severe turbulence would still be pretty rare, and weather forecasting algorithms already give pilots a heads-up on choppy air. Even so, any increase in turbulence can be tough on planes, and pilots may need to burn more fuel flying around it.

Predicting atmospheric patterns is dicey at best, and the full effects of climate change on air travel aren’t at all clear. Much of what happens will depend on the behavior of large-scale atmospheric currents on the atmospheric slopes from the equator to the poles. 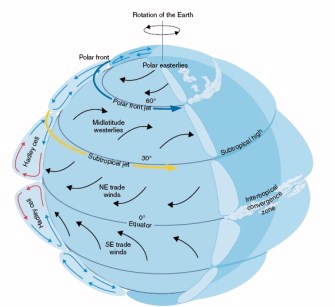 Scientists are already seeing changes, though — for example, there’s no agreement on whether atmospheric currents are getting stronger or weaker. In any event, Simpson told the Post that scientists are getting more certain about changes “that we expect to happen higher up, near the altitude where planes fly.”

Tags
air travelairplaneatmospheric currentsclimate changeflightjet streamturbulenceweather systemswinds
In this article
air travelairplaneatmospheric currentsclimate changeflightjet streamturbulenceweather systemswinds
Related
Hard Science
Wandering icebergs could trigger tsunamis
Icebergs aren’t just a threat to unsinkable ships. Their ability to cause underwater landslides poses a danger to coastal cities.
The Past
Busting the Easter Island myth: there was no civilization collapse
For decades, researchers have proposed that climate change and human-caused environmental destruction led to demographic collapse on Easter Island. That’s probably false, according to new research.
Hard Science
New research finds that reforesting Europe would increase rainfall, fighting a drying trend
Trees store carbon dioxide, have a cooling effect in cities, and reduce flood risks.
The Future
Say goodbye to air conditioning with new roofing material
The guilt-free air conditioning, called “cooling paper,” is made from recyclable paper and doesn’t use any electricity.
The Present
57% of U.S. structures lie within a natural “hazard hotspot”
A new study mapped areas of the U.S. that are most likely to suffer natural disasters.
Up Next
Starts With A Bang
How much gold is in the James Webb Space Telescope?
Its 18 large, segmented golden mirrors aren’t even the whole story. But how much gold is really in there?“Hey, if our eyes could access the infrared part of the light spectrum, […]