Do you think we’re actually living in a gigantic computer simulation like the one in The Matrix? If you do, you’re not alone. In fact, you’re in some very famous, very wealthy company. Near the end of a recent New Yorkerarticle about Y Combinator, a Silicon Valley tech-company incubator, this paragraph raised the possibility we’re in need of a red pill:

Many people in Silicon Valley have become obsessed with the simulation hypothesis, the argument that what we experience as reality is in fact fabricated in a computer; two tech billionaires have gone so far as to secretly engage scientists to work on breaking us out of the simulation.

The billionaires weren’t named, but we can guess. Earlier in the piece, its writer, Tad Friend, pointed out something odd to one of his interviewees, Y Combinator president Sam Altman. Friend noted that Altman apparently hadn’t visited a bathroom over the course of several days’ interviews. Altman responded, “I will practice going to the bathroom more often so you humans don’t realize that I’m the A.I.” It could be he wasn’t 100% joking. 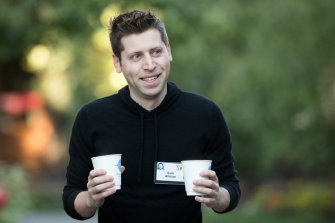 Were is all that coffee going, Mr. Altman? (DREW ANGERER)

Another breakout candidate is Elon Musk, who claimed in an interview at Recode’s Code Conference 2016 that the odds of us not being in a simulation are “one in billions.” His reasoning is that with all the advancements we’ve seen already, how could it not happen?

Musk suggests this has been a conversation in a lot of the hot tubs he soaks in with his (presumably also-wealthy) friends, some of whom are deeply involved in virtual-reality projects. Certainly, current systems like Oculus couldn’t fool anyone, but these people spend their days immersed in VR and new tech, dreaming and designing future capabilities, so they would naturally be drawn to the question. Wait a minute. Wasn’t humanity actually trapped and wired into (let’s say hot) tubs in The Matrix?

At least one major company whose business depends on a clear-eyed assessment of imminent possibilities also agrees this could be where we really are. Financial behemoth Bank of America considers the odds of us living in a simulation to be as high as 50%. Yipes.

Big Think recently asked Bill Nye what he thought of the entire notion, and he asked the really simple unanswerable question: How could we ever know, absent a really inarguable glitch? [Insert Trump joke here.]

A skeptic could ask why ubiquitous overlords would even allow this topic to come up in our simulated discussions — or allow the release of a movie like The Matrix — if they didn’t want us to know. (Maybe the two Matrix sequels were supposed to ruin the original.) Could letting the topic come up in conversation or science fiction be a way to de-pressurize and de-fang doubts our programmers consider inevitable? Maybe articles like this, in which the writer doesn’t believe it’s a simulation, are part of that steam-letting mechanism.

In a way, maybe choosing to believe we’re in a simulation fills an unconscious need for a post-religion, science-based God. And it’s not like escaping a matrix would answer all of our Big Questions: We still would want to know if there’s a reason we exist and what happens when we die.

Tags
bill nyebillionaireselon muskmatrixpost-religious beliefred pillsam altmansilicon valleysimulationvirtual realityvry combinator
In this article
bill nyebillionaireselon muskmatrixpost-religious beliefred pillsam altmansilicon valleysimulationvirtual realityvry combinator
Related
Learning technologies
VR training is the future. Here’s why, and how companies are using it
The time to begin exploring VR training is now. Here are the pros, cons, and different ways this technology can be utilized.
The Future
The metaverse: From science fiction to virtual reality
Think of a combination of immersive virtual reality, an online role-playing game, and the internet.
The Future
Which countries are going to Mars this decade?
We are likely to see the first humans walk on Mars this decade.
The Future
Immersive technology will revolutionize everything from theme parks to daily life
Virtual reality continues to blur the line between the physical and the digital, and it will change our lives forever.
The Present
Virtual reality tourism can boost travel in a post-pandemic world
Virtual tourism has thus far been a futuristic dream, but a world shaped by Covid-19 may be ready to accept it.
Up Next
Neuropsych
Robin Williams died because of ‘a terrorist inside his brain’
Robin Williams was trapped inside his own rapidly-deteriorating brain, which was being overtaken by what his wife refers to as a “terrorist” — Lewy Body Disease.