In the late 8th century, a seafaring people from modern-day Scandinavia began to earn the name víkingr, which meant “pirate” in early Scandinavian languages.

Today, Vikings are often thought of as barbaric blonde-haired invaders who violently changed the course of European history. And that’s mostly true: Vikings were cruel and skilled warriors, innovative shipwrights, and they not only colonized many parts of Europe, but also became the first Europeans to settle in North America.

But a new study published in Nature offers a more nuanced understanding of the Vikings, suggesting they were more genetically diverse than previously imagined. For the study, an international team of researchers examined the DNA of 442 people who lived from roughly 2,400 B.C. to 1,600 A.D. The remains were collected from Viking burial sites, and most dated back to the Viking Age from roughly 800 to the 1050s. 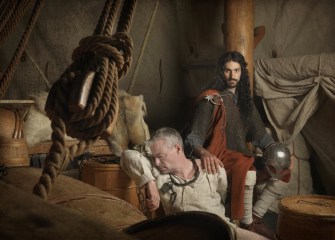 The results deal a blow to our modern image of Vikings.

“We didn’t know genetically what they actually looked like until now,” project leader Professor Eske Willerslev, director of The Lundbeck Foundation GeoGenetics Centre, University of Copenhagen, said in a statement. “We found genetic differences between different Viking populations within Scandinavia which shows Viking groups in the region were far more isolated than previously believed. Our research even debunks the modern image of Vikings with blonde hair as many had brown hair and were influenced by genetic influx from the outside of Scandinavia.” 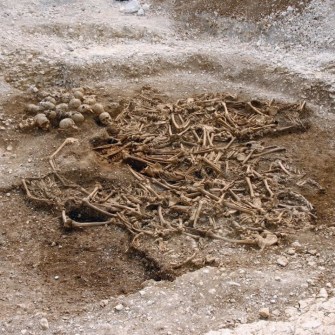 A mass grave of around 50 headless Vikings from a site in Dorset, UK. Some of these remains were used for DNA analysis.Credit: Dorset County Council/Oxford Archaeology

Part of that genetic influx came from afar. The team’s genetic analysis — which is the most comprehensive ever conducted on Viking remains — revealed influences from Southern Europe and Asia. For example, some Viking remains showed influences of mixed European and Sami heritage. (Known for reindeer herding throughout Scandinavia, the Sami people share some genetic links with Asian populations.)

Findings like these suggest the Vikings might have had less hostile interactions with some groups than previously thought.

“We have this image of well-connected Vikings mixing with each other, trading and going on raiding parties to fight Kings across Europe because this is what we see on television and read in books – but genetically we have shown for the first time that it wasn’t that kind of world,” Willerslev said. “This study changes the perception of who a Viking actually was — no one could have predicted these significant gene flows into Scandinavia from Southern Europe and Asia happened before and during the Viking Age.”

What’s more, some of the people who received Viking burials weren’t genetically related to the Vikings, suggesting the term “Viking” might have referred more to a job description or cultural identity rather than genetic heritage.

“Importantly our results show that ‘Viking’ identity was not limited to people with Scandinavian genetic ancestry,” study co-author Søren Sindbæk, an archaeologist from Moesgaard Museum in Denmark, said in a statement. “Two Orkney skeletons who were buried with Viking swords in Viking style graves are genetically similar to present-day Irish and Scottish people and could be the earliest Pictish genomes ever studied.”

Although Vikings idolized warrior culture, took slaves, and focused much of their energy on conquering Europe, they also helped expand trade throughout the continent, developed innovative farming and crafting techniques, and were relatively egalitarian in terms of women’s rights. Using a genetic framework, the new study adds a deeper layer to history’s understanding of the Vikings.

“The results change the perception of who a Viking actually was,” Willerslev said in the statement. “The history books will need to be updated.”

In the Canaan religion, Yahweh was a lesser god, who was assigned the land of Israel. Here’s how he became “God Almighty.”
Up Next
Health