When we think about our ancestors, our minds tend to wander to geography. We introduce our progenitors by noting they were Norwegian, Brazilian, Indonesian, or members of an American Native tribe. Personal genetic tests, such as those offered by Ancestry and 23andMe, offer customers a travel log of their lineages’ global journeys. And some of our more obvious phenotypic markers, such as hair and skin color, evolved in relationship with the lands our ancestors called home.

Lost within this land-locked focus is the fact that social and cultural factors—how our ancestors cohabitated and interacted with each other—also influence gene flow. In doing so, these factors shaped our evolution and genetic diversity. As a new study has found, for the peoples of the Indian subcontinent, such social and cultural factors may be more important to their genetic variation than the deserts, grasslands, and tropical forests between them. 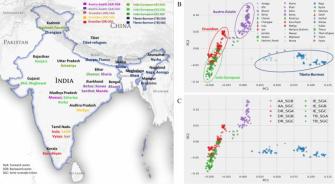 A map showing the locations of 33 Indian populations alongside plot graphs showing the relations between sociolinguistic groups and genetic structures.Credit: Molecular Biology and Evolution

The new study, published in Molecular Biology and Evolution, began when Aritra Bose, who earned his doctorate at Purdue in genetics and data science, was researching the close ties between genes and geography in Europe. Originally from Calcutta, India, Bose wondered if such a strong link would be true of his home country. He teamed up with Peristera Paschou, a population geneticist and associate professor of biological sciences at Purdue University, and Petros Drineas, associate head of Purdue’s Department of Computer Science, to find out.

“Our genome carries the signature of our ancestors, and the genetic structure of modern populations has been shaped by the forces of evolution. What we are looking for is what led different groups of people to come together and what drove them apart,” Paschou, who led the study with Drineas, said in a press release. “To understand the genetics of human populations, we created a model that allows us to consider jointly many different factors that may have shaped genetics.”

The researchers developed a computer model called COGG (Correlation Optimization of Genetics and Geodemographics) to analyze population genetic substructure. They then feed COGG a dataset featuring 981 individuals from 90 Indian groups, further merging that with a dataset of 1,323 individuals from 50 Eurasian populations. The model crunched the numbers and found something surprising.

Studies looking at European populations have typically found a strong correlation between genotype and geography. As one National Geographic writer put it when discussing a study published in Nature: “The result was startling—the genetic and geopolitical maps of Europe overlap to a remarkable degree. On the two-dimensional genetic map, you can make out Italy’s boot and the Iberian peninsula [sic] where Spain and Portugal sit. The Scandinavian countries appear in the right order and in the south-east, Cyprus sits distinctly off the ‘coast’ of Greece.”

Such a confluence of the geo and the genome was not found in the India study; in fact, the analysis showed a weak correlation between genotype and geography. Instead, it was shared language that proved the major genetic link.

The researchers found that people who speak the same language were much more likely to be closely related, regardless of where they lived on the subcontinent. For example, their analysis showed that Indo-European and Dravidian speakers shared genetic drift with Europeans, while Tibeto-Burman speaking tribes shared it with East Asians.

Social structure also showed a stronger correlation than geography in their analysis. The researchers hypothesized this correlation originated from the social stratification imposed by India’s caste system.

For several thousands of years, the caste system divided Hindus into hierarchical groups based on their karma (work) and dharma (duty). Marriage was strictly limited within one’s caste, resulting in a long history of endogamy. Though the caste system was effectively expunged in 1950 by the Indian government, such endogamy held sway over Indian society long enough to have a powerful effect on the country’s historic gene flow.

“Our results clearly show that endogamy and language families are pivotal in studying the genetic stratification of Indian populations,” the researchers write in the study.

None of this is to say that geography played no part in the ancestral gene flow of India, nor that social and cultural factors didn’t influence genotypes across Europe. They most certainly did. That Nature study, for example, discovered genetic clusters in Switzerland that were language-based. And Europe’s geographic distribution may have more to do with historical sociopolitical realities than environmental ones.

The point of both studies, however, is not to tie our genetic history to land or language, but to understand how genes flowed throughout historical societies.

“It sheds light on how genetics work in our society,” Bose said in the same release. “This is the first model that can take into account social, cultural, environmental and linguistic factors that shape the gene flow of populations. It helps us to understand what factors contribute to the genetic puzzle that is India. It disentangles the puzzle.”

With an improved knowledge of historic gene flow, scientists may be able to further biomedical research to better detect rare genetic variants, assess individual risks to certain diseases, and predict which populations may be more or less susceptible to particular drugs. By opening the avenues we use to understand our genetic history, we can hopefully advance such knowledge and understanding.

Did traditional Chinese thought pave the way for the philosophy of Maoism?
Up Next
The Present

New research from MIT is unintuitive but could lead to a better system.