In 2007, a man in Potočani, Croatia, was digging a foundation for a garage when he discovered a grisly scene: the 6,200-year-old remains of 41 people buried together in a mass grave.

The victims died violently, with almost every person showing at least one traumatic head injury. But what struck researchers was the demographics of the group, and the way they died.

The victims were men, women, and children. They shared a common ancestry, but most weren’t closely related, and genetic analyses suggest they weren’t new immigrants to the area. And, curiously, almost all of the victims suffered blows to the back of the skull, suggesting they didn’t die in battle.

So, what happened, and why?

In a recent study published in PLOS ONE, which is the largest-scale genetic analysis of an ancient massacre to date, researchers propose an unsettling answer: The organized slaughter was indiscriminate. 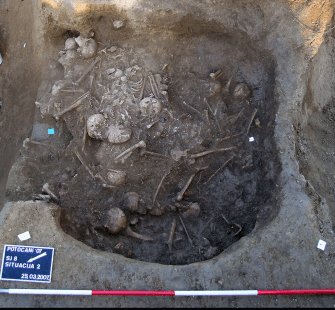 “Combined with the bioanthropological evidence that the victims were of a wide range of ages, these results show that large-scale indiscriminate killing is a horror that is not just a feature of the modern and historic periods, but was also a significant process in pre-state societies,” the researchers wrote.

But that’s not to say the massacre was completely random. The researchers noted that massacres, ancient and modern, are typically processes, not singular events. In other words, you can trace most massacres back to large-scale factors that begin to stress a society. 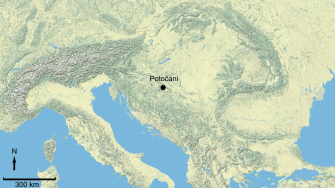 It might start with a society that’s facing dwindling resources. Over time, that society might start blaming another group for its suffering. And if the society’s fear and hatred grows strong enough to dehumanize the other group, some in the community might be triggered to commit large-scale violence.

In the context of the Potočani massacre, the researchers noted that climate change—in combination with a potential population—might have depleted resources in the region. For example, extended droughts or flooding might have made it hard to grow or find food, which could’ve sparked tension between local groups and paved the way for a massacre.

(In other cases of prehistoric massacres, researchers have proposed climate change as a likely contributor.)

Still, there’s no hard evidence for major climatic changes in the Potočani region at the time of the killings. And while previous explanations for the massacre include xenophobia, the recent genetic analysis suggests the victims weren’t new to the area. So, the exact motive of the massacre remains a mystery, as do the identities of the perpetrators. 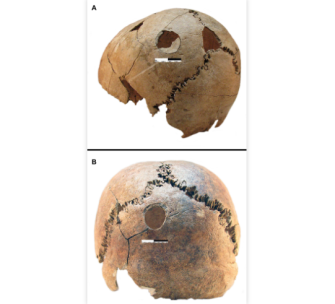 But given that the perpetrators killed indiscriminately—at close range and without regard to age or sex—the massacre suggests that organized violence is a phenomenon deeply rooted in human psychology.

Mario Novak, lead study author and head of the Laboratory for Evolutionary Anthropology and Bioarchaeology at the Institute for Anthropological Research in Zagreb, Croatia, told Live Science that he hopes learning about history’s dark moments will enable modern people to better understand the roots of violence.

“By studying such ancient massacres, we might try to get a glimpse into the psychology of these people, and maybe try to prevent similar events today,” Novak said. “We have evidence of ancient massacres going back to 10,000 years ago, at least. Today, we also have modern massacres — the only thing that’s changed is we now have more efficient means and weapons to do such things. But I don’t think human nature or human psychology has changed much.”

Tags
Anthropologyclimate changefossilsgeneticshistoryviolence
In this article
Anthropologyclimate changefossilsgeneticshistoryviolence
Related
Hard Science
200 years of exploring Antarctica
What we’ve learning from the world’s coldest, most forbidding, and most peaceful continent.
High Culture
The most controversial painting in Russian history
Created in the 1880s, “Ivan the Terrible and His Son Ivan,” which depicts a father murdering his son, divides Russians to this day.
The Past
Ceramics, corn cobs, and other strange things we used before toilet paper
Some objects were softer than others.
Life
Most of the seafloor is a thick graveyard of ooze
Each year, several trillion pounds of microscopic silicon-based skeletons fall down the water column to pile up into siliceous ooze.
Neuropsych
The trouble with medicating mental illness
Has the “age of psychopharmacology” shrunk society’s sense of responsibility for mental health?
Up Next
The Present
Plastic pollution from face masks could devastate the environment
Masks are great, but what happens when we try to throw out a billion masks at once?