In the Mexico Basin about 45 miles north of Mexico City in the Santa Lucía region, the new Felipe Ángeles Airport is under construction. According to Mexico’s National Institute of Anthropology and History (INAH), workers there have dug up a massive surprise: a trove of 60 ice-age mammoth skeletons. They’ve also unearthed 15 pre-Hispanic human burial sites. 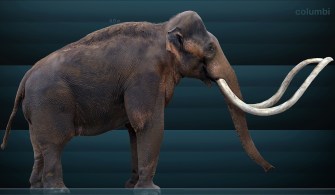 The pachyderm bones belong to Colombian mammoths, Mammuthus columbi, who last lived in North America in the Pleistocene epoch between 2.6 million and 13,000 years ago, when they are believed to have become extinct. They’re the mammoths that visitors to Los Angeles’ La Brea Tar Pits encounter. (No woolly mammoth remains were found in Santa Lucía.)

It’s not yet known how many of the mammoth skeletons are complete. It is clear, though, that males, females, and their young are there. The bones are being found between 80 centimeters and 2.5 meters below the surface and spread across three exploration areas. First discovered in October 2019, the digs are still being stabilized and undergoing analysis and classification, according to INAH National Coordinator of Archaeology, Pedro Francisco Sánchez Nava.

How 60 mammoths wound up together in death at this location is an interesting question. No signs of human tracks leading to or from the site are evident nor have any indications of hunter accommodations have been found. By contrast, the prehistoric mammoth hunting site discovered in the Mexican municipality of Tultepec in November 2019 does exhibit such signs of human interaction.

Archaeologists suspect the 60 mammoths got stuck in a muddy swamp over time — the site is near the shores of the former Lake Xaltocan. Researchers say the most complete skeletons found are those close to the former lake’s shoreline. It remains possible that the immobilized mammoths were then preyed upon by hunters even without clear evidence of that so far.

Once the remains are retrieved, they’ll be studied by a team of 30 archaeologists, supported by a trio of restorers, to make a full account of what’s been found. They hope to learn more about how and precisely when the animals lived, ate, and what health issues they may have had as evidenced in their skeletal remains. 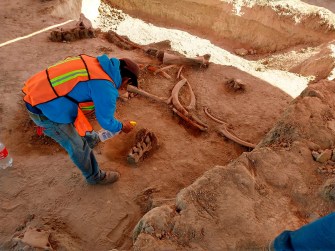 Meanwhile, construction of the new airport continues. Says Salvador Pulido Méndez, director of INAH Archaeological Salvage, “So far, no findings have been recorded on the land that lead to the rethinking of the construction site, either totally or partially. Rather, the works have allowed INAH a research conjuncture in a space where, although it was known of the existence of skeletal remains, they had not had the opportunity to locate, recover and study them.”

Certain types of dogs seem to be more discerning than others, however.
The Past

From 1974 to 1978, the chimps of Gombe Stream National Park in Tanzania were at war with each other, the first time conservationists saw chimps engage in calculated, cold-blooded killing.
Up Next
Strange Maps

To get a sense of faraway places, these ‘atlases’ let the locals give you their perspective.