The stunning discoveries recently made in northern Mexico’s Chiquihuite Cave raise more questions than they answer. Even so, they change the conversation: The Clovis people who arrived 15,000 years ago in the Western Hemisphere were not the first people here as previously believed. The 30,000-year-old tools and animal remains of Chiquihuite Cave belonged to someone else. We have no idea who, but they were gone for thousands of years by the time the Clovis culture began.

“For decades people have passionately debated when the first humans entered the Americas,” says co-study lead DNA scientist Eske Willerslev of St. John’s College, University of Cambridge. “Chiquihuite Cave will create a lot more debate as it is the first site that dates the arrival of people to the continent to around 30,000 years ago — 15,000 years earlier than previously thought.”

The discovery is presented in a paper published in the journal Nature. The project was led by Ciprian Ardelean, whose main affiliation is at the University of Zacatecas. 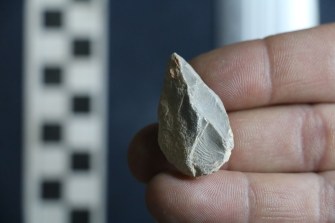 Inside the high-altitude cave some 9,000 feet above sea level, archaeologists found almost 2,000 stone tools. The scientists also found plant and animal remains at the site that radiocarbon dating identified as being from 25,000 to 30,000 years ago. One of the paper’s first authors, geneticist Mikkel Winther Pedersen of the University of Copenhagen, says, “We identified DNA from a wide range of animals including black bears, rodents, bats, voles and even kangaroo rats.”

So, whose tools and animals were they? The researchers have no idea, since no human remains were found in the cave. This suggests the site was not a permanently occupied settlement, but instead a place that people used only periodically. “These early visitors didn’t occupy the cave continuously,” says Willerslev. “We think people spent part of the year there using it as a winter or summer shelter, or as a base to hunt during migration. This could be the Americas’ oldest ever hotel.”

Ardelean says that perhaps the most important thing is who they don’t seem to have been, based on the style of tools that were found: the people of the Clovis culture. “We don’t know who they were, where they came from or where they went. They are a complete enigma. We falsely assume that the indigenous populations in the Americas today are direct descendants from the earliest Americans, but now we do not think that is the case. 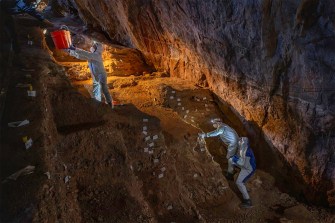 The time to which the Chiquihuite Cave specimens date mean people were there during the Last Glacial Maximum — this was a time when continental ice sheets were at their maximum size, making northern Mexico seriously cold. Ardelean says, “There must have been horrible storms, hail, snow.” Nonetheless, the archaeologist, who worked the site for 10 years and even spent months living in the cave, tells Nature that it’s well-insulated and would have provided adequate shelter.

While the excitement in archaeology typically derives from findings constructed bit-by-bit from the painstaking collection of artifacts, the excavation of the difficult-to-reach Chiquihuite Cave was an exceptionally charged experience. The cave is located in a region of Mexico controlled by drug cartels, and the safety of the scientists was by no means assured.

“It was an unforgettable experience,” recalls Pedersen. “It is a very unsafe place to travel, so we were accompanied by Mexican police officers in armored cars to the foot of the mountain. We left before sunrise to climb up to the cave so that we weren’t spotted.”

Says Willerslev, “I will never forget being part of this research, it was an unbelievable experience. The implications of these findings are as important, if not more important, than the finding itself. This is only the start of the next chapter in the hotly debated early peopling of the Americas.” 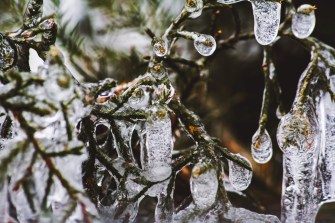 The first few pages of that next chapter may be a companion paper published by two of the study’s contributing authors — Lorena Becerra-Valdivia of the University of New South Wales and Thomas Higham from the University of Oxford. It contains a statistical model of early human settlement of the hemisphere based on the Chiquihuite Cave and 41 other archaeological sites in North America, as well as Beringia, a region of eastern Siberia and western Alaska. Its authors also factored in historical climatic evidence and genetics. Their model presents a history in which humans were in North America far earlier than the previously accepted date of 15,000–16,000 years ago. That the model is based on sometimes ambiguous data from so many sites inevitably means that its conclusions are likely to be controversial, but it is in any event a worthwhile contribution to the discussion.

The model also supports the Costal Migration Hypothesis that visitors traveling the continent during the glacial maximum would have had to hug the coastlines to avoid the ice sheets atop inland areas.

So, whoever these early humans were, what happened to them? Geneticist David Reich of Harvard Medical School in Boston, Massachusetts tell Nature, “There continues to be no convincing genetic evidence of a pre-15,000-years-ago human presence in the Americas.” Ardelean, for one, is not dissuaded by this. He proposes that these early populations simply didn’t survive long enough to contribute to the modern gene pool. He says, undeterred, “I definitely advocate for the idea of lost groups.”

Ardelean concludes, “The peopling of the Americas is the last holy grail in modern archaeology. Unconventional sites need to be taken seriously, and we need to go out and intentionally look for them. This site doesn’t solve anything, it just shows that these early sites exist. We are dealing with a handful of humans from thousands of years ago, so we cannot expect the signals to be very clear. We have literally dug deeper than anyone has done in the past.”

Sigmund Freud developed the decidedly unscientific principles of psychoanalysis in a time when most psychologists were trying to join the ranks of chemists and medical doctors.
Up Next
The Present

Like it or not, you can’t ignore how people look or sound