Much is being made about how the proliferation of fake news on Facebook and Google has contributed to the surprising 2016 Presidential election results. But that’s likely just a distraction from the larger news crisis. As many established news sources devolved into partisan mouthpieces, with focus on one-sided arguments or sensational character-driven and issue-free reporting, yellow journalism has taken hold in America. The last time the country had such a volatile combination of unreliable yellow press and tough-talking men in charge, the United States got itself into two unnecessary and costly wars, which it eventually won because it had an overwhelming military advantage. And this time, in the age of nuclear weapons and the Internet, where the majority of Americans now get their news, the consequences could be much worse.

What is “yellow press” or “yellow journalism”? The terms go back to 1890s, when two newspapers were battling it out for control of the New York market. The conflict was waged between larger-than-life publishers Joseph Pulitzer and William Randolph Hearst. In one instance of their competition, Hearst’s “New York Journal” poached a cartoonist from Pulitzer’s “New York World”, who drew a very popular character known as the “Yellow Kid”. The fight over who gets the cartoonist and thus dramatically increase their paper’s circulation gave rise to the term “yellow journalism”.

To draw in more readers, Hearst and Pulitzer resorted to other methods like sensationalist headlines (which today we call “clickbait”), often misreporting or exaggerating the impact of events. The headlines would often try to scare the reader, while the content hit hard on emotion, fake interviews, pseudoscience, often offering some kind of anti-establishment fight, investing the reader with the plight of a supposed underdog.

In particular, both newspapers zeroed in on a conflict in Cuba, which was fighting for its independence from Spain. Both newspapers pushed the situation onto the American public in such dramatic, often untrue terms, that they were eventually seen as responsible once the U.S., led by the pro-business interventionist Republican President William McKinley, actually decided to fight Spain on behalf of the Cubans in 1898. The decision was spurred by the incident with the U.S. battleship “Maine,” which mysteriously exploded in the Havana harbor. Hearst went so far as to claim the resulting war as his achievement, allegedly stating in a telegram “You furnish the pictures, I’ll provide the war!”

The existence of the Hearst telegram has been debated by historians, but the competition between Hearst and Pulitzer and the resulting public hysteria was widely seen as a strong factor in the creation of the Spanish-American War of 1898, which led to U.S. having control of Cuba, Puerto Rico and the Philippines. The Filipinos then revolted against U.S. rule, spurring on an even more destructive Philippine-American War that lasted 3 years and saw 4,200 Americans die as well as 220,000 Filipinos (combatants and civilians).

Some historians since tried to lessen the supposed impact of the Hearst/Pulitzer rivalry, pointing out that the two battling newspapers were based in New York and it’s not a fact they could have influenced people across the country, including the decision-makers in Washington. This certainly isn’t much of an issue in the Internet age when news by major publishers can reach millions instantaneously. 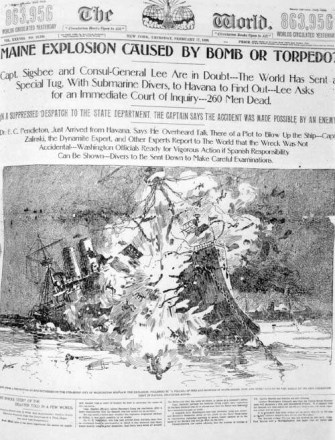 Lest you think the newspapers synonymous with yellow journalism were rightwing conspiracy outlets, both were actually Democratic and sympathetic towards immigrants and labor. In fact, the modern climate is dominated by internet sites from all sides of the political spectrum, who all use tactics very reminiscent of the yellow press. These sites feature large simple headlines, often of a clickbait variety, where they either exaggerate the scope of the news they are reporting or dramatize the supposed conflict in the story. And the stories that come out are often very biased, one-sided narratives, offering little of an alternative point of view and generally work to rile the public up (and get clicks).

Many have pointed the finger at the media for somehow failing the American public in the 2016 election, with conservatives claiming media bias in favor of Clinton and with liberals decrying the media’s inability to adequately warn them that a President Trump was actually possible (or could be prevented). But in reality, it’s possible to see 2016 not as a year when traditional media (tv and newspapers) failed, but as a year when Internet-based media took over, often employing tactics of questionable journalistic integrity. 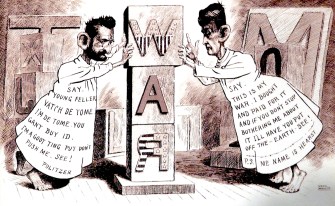 “Yellow journalism” cartoon about the Spanish-American War of 1898, featuring Hearst and Pulitzer.

President-elect Donald Trump’s appointment of Steve Bannon of Breitbart News as his chief strategist has raised all manner of alarms in liberal circles. His rise represents the tremendous influence the conservative media company he ran for a number of years as the executive chairman has had on this election. It became a de-facto mouthpiece of the Trump campaign, telling stories that benefitted the candidate.

The criticism of Bannon is that his site gives voice to a number of ideologues of the so-called “alt-right” movement, which is often associated with racist, misogynist, homophobic and anti-semitic attitudes. Whether people with such views represent a minority of the site’s users and the movement’s overall constituency is hard to tell, but the fact is – Breitbart News (with 150 million views in July 2016) gives some of them an outlet, like the columns by the celebrated conservative troll icon Milo Yiannopoulos who has proudly declared himself to be living in a “post-fact era”.

It’s difficult to gauge if Bannon personally holds dangerous views, and while some have risen to his defense, he’s certainly being blamed by association. Interestingly, Breitbart’s former boss and founder of Breitbart News, the late Andrew Breitbart, was involved in the creation of several internet juggernauts, including the other highly influential conservative news aggregator site Drudge Report, a strong Trump backer, and one of the most popular web portals in the world. The Drudge Report was actually the second most popular media site in the U.S. as of July 2016, with almost 1.5 billion page views, ahead of Google and New York Times. Curiously, Breitbart was also involved in the creation of the popular Huffington Post, the liberal alternative to the likes of Drudge Report and Breitbart News. Huffington Post is as rabidly leftist as the other sites are conservative.

In this state of devalued journalistic integrity and sensationalist headlines that are more interested in Kardashian-like antics rather than serious reporting, as well as the spread of fake news, it’s hard to be optimistic about the role of the news media as a watchdog on the ambitions and mistruths perpetuated by self-serving politicians on all sides of the spectrum. And the particular rise of Steve Bannon to strategizing for the President poses many questions, as he also controls a burgeoning media outlet, which surely will continue to be at Trump’s disposal.

Population growth is driven by three changes: Fertility, mortality, and migration.
Up Next
Culture & Religion

10 Golden Age Philosophers, and Why You Should Know Them

We can all rattle off a few Greek philosophers to win a trivia prize, but how many Golden Age philosophers are you familiar with? Here’s a primer.