The Conservatism of Fatigue 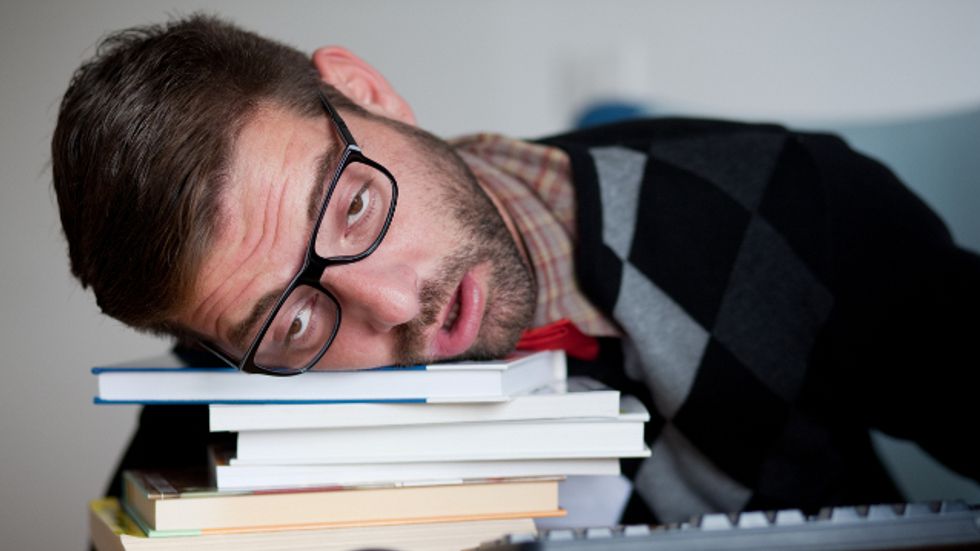 A research team led by University of Arkansas psychologist Scott Eidelman argues that conservatism — which the researchers identify as “an emphasis on personal responsibility, acceptance of hierarchy, and a preference for the status quo” — may be our default ideology. If we don’t have the time or energy to give a matter sufficient thought, we tend to accept the conservative argument.

“When effortful, deliberate responding is disrupted or disengaged, thought processes become quick and efficient,” the researchers write in the Personality and Social Psychology Bulletin. “These conditions promote conservative ideology.”

“We do not assert that conservatives fail to engage in effortful, deliberate thought,” they insist. “We find that when effortful thought is disengaged, the first step people take tends to be in a conservative direction.”

In other words, it takes a bit more effort to think like a liberal. If you're tired, distracted, or forced to think quickly, effort is not so easily supplied. Glancing at the study, I think the authors over-explain their result a little, drawing on work by Jon Jost's "motivated social cognition approach." Eidelman and Co. write:

[T]he endorsement of political conservatism stems from needs to manage threat and uncertainty, and this approach could characterize the manipulations of load and time pressure as increasing par-ticipants’ needs for cognitive closure. When distracted or in a hurry, the cost of not having closure and the need to reach a quick, simple, and certain answer increases.

I think it's easier than this. The content of "conservatism and "liberalism" changes fairly rapidly over time. In broadly liberal cultures, the tendency of the culture is to grow more and more liberal over time. (Why this should be so is a fascinating question.) Today's conservatives would have been radically liberal just a half-century ago. Conservatism is a lagging indicator of social change. As a shifting cultural construction conservativsm tends to codify and justify last year's status quo, whatever it may have been. Liberalism by contrast is a mildly progressive force. It is in part an implicit critique of the status quo distribution of wealth, power, opportunities, and so on. Part of the liberal idea is that invidious inequalities are woven so tightly into the fabric of our institutions and culture that they can be very hard to detect at all.

This Meg Wolitzer's essay in the NYTBR points out a number of rather subtle ways fiction written by men is taken more seriously. Consider this sharp observation about book-cover design:

A writer’s own publisher can be part of a process of effective segregation and vague if unintentional put-down. Look at some of the jackets of novels by women. Laundry hanging on a line. A little girl in a field of wildflowers. A pair of shoes on a beach. An empty swing on the porch of an old yellow house.

Compare these with the typeface-only jacket of Chad Harbach’s novel, “The Art of Fielding,” or the jumbo lettering on “The Corrections.” Such covers, according to a book publicist I spoke to, tell the readers, “This book is an event.” Eugenides’s gold ring may appear to be an exception, though it has a geometric abstraction about it: the Möbius strip ring suggesting that an Escher-like, unsolvable puzzle lies within. The illustration might have been more conventional and included the slender fingers and wrist of a woman, had it not been designated a major literary undertaking.

I took semiotics back at Brown University in the same heyday of deconstruction in which Eugenides’s novel takes place (he and I were in a writing workshop together), but I don’t need to remember anything about signifiers to understand that just like the jumbo, block-lettered masculine typeface, feminine cover illustrations are code. Certain images, whether they summon a kind of Walker Evans poverty nostalgia or offer a glimpse into quilted domesticity, are geared toward women as strongly as an ad for “calcium plus D.” These covers might as well have a hex sign slapped on them, along with the words: “Stay away, men! Go read Cormac ­McCarthy instead!”

She's right. And now that it's been pointed out to me, it seems completely obvious that she's right. But I'd never really noticed this before, so it can't really have been obvious. Now I'll have my eye open for subtle cover-design sexism. Not all the time, though. If I'm, say, tired or distracted or under time pressure, I'll forget to notice and I'll become once again slightly less attuned to the biases built into my culture. I'm not so sure anything more much more complicated than this is going on.

That conservatism is our "default ideology" strikes me as a misleading way to put the point that in a broadly liberal culture moving in an ever more liberal direction, it take some effort to keep up with the leading edge of the evolving liberal sensibility and thus to not fall into a comparatively "conservative" way of looking at things--a less-liberal-than-we're-going-to-be-next-year way of looking at things.