Burger King has just announced they’re testing a new version of their Whopper that’s completely free of actual beef, in 59 locations around St. Louis. Not that even Whopper devotees can tell the difference, according to reports. It’s called the “Impossible Whopper.” (Impossible Burgers and Beyond Meat burgers are already available in grocery stores.)

The food chain isn’t the first to offer a lab-grown, plant-based patty option, but Burger King’s announcement is a very big deal. While the new Whopper’s currently in testing, if it becomes available at its 7,200 restaurants, it means millions of consumers will be introduced to an animal cruelty-free meat option that’s every bit as satisfying as traditional fare.

For those concerned about their health, climate change, and animal rights, there might be no turning back.

While the Impossible Whopper and other alternative “meats” are a beginning, researchers are also looking further down the road to animal-product alternatives constructed at the cellular level that don’t even require plant matter as current options do.

Enter “Cellular Agriculture,” or “Cell-ag,” a new form of food and clothing production that results in food and clothing products indistinguishable from traditional offerings without the necessity of raising — and killing — a live animal, or even a plant. A report explaining what this could mean has just been released. It’s called 90 Reasons to Consider Cellular Agriculture.

As author Kristopher Gasteratos notes in the report’s introduction, modern animal husbandry is no longer the industry we’ve known for thousands of years: “While animal products have been incredibly positive for society over multiple generations, today they are proving more destructive than beneficial with the rise of factory farming.” Gasteratos is a researcher at Harvard and founder of the Cellular Agriculture Society.

The report’s cumulative effect is overwhelming: 90 good reasons is a lot of good reasons. They’re arranged in categories: Health, Environment, Human & Animal Rights, and Business and Economics. Here’s a brief summary of each. 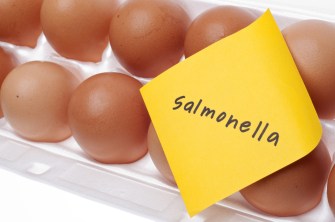 This section contains, among other things, a list of the things we won’t get from lab-grown cell-ag foods, including: 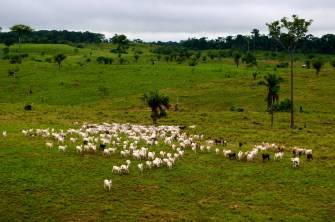 We know that the extensive land-use requirements of animal-based products are among the main drivers of climate change. For some animals, it’s an issue of grazing land. For others, such as seafood, it’s processing.

Here’s how much less land Gasteratos estimates we’ll use after switching to cell-ag:

It’s much the same story with water use:

Here’s the reduction in greenhouse gases (GHG) an industrial switch to cell-ag may produce:

Production and food and clothing animals is dirty work, and there’s a long list of pollutants it generates, all of which may be avoided by cell-ag: land and ocean animal waste, production chemicals that create dead zones, and plastic pollution from the fishing industry among them.

In addition to resulting in less deforestation, cell-ag promises less ocean habitat destruction from bottom-trawling, and an overall reduced need for energy in food production.

The animal and human rights case

Well, obviously, cell-ag could bring about the end of killing countless cows, pigs, chickens, and seafood and so on. Not to mention the elimination of the often inhumane conditions, particularly in factory farming, in which production animals spend their short lives.

You might not think at first there’s much of a human-rights issue in food production, but there are several, and they’re serious. Factory farming and food processing operations can be brutal places to work. Factory farm workers, says the report, are at higher risk for amputations, tannery workers are regularly exposed to carcinogenic chemicals, and the seafood industry exploits cheap and slave labor for catching fish. 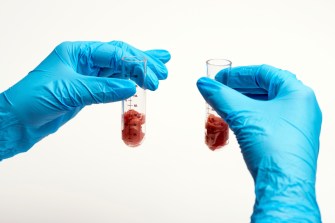 The business and economics case

In addition to the dawning of a new industry with lots of new jobs, the rise of cell-ag has other positive economic benefits as well.

A food supply that’s independent of weather conditions cannot only be a boon in the climate-change era, but the same foods — being grown indoors — can become available in any area, regardless of local climate.

Because cell-ag is more predictable and controllable than traditional agriculture, it affords not only greater quality consistency, but also greater financial predictability. Cell-ag can reduce the uncertainties faced today by today’s growers, and help avoid the need for the many subsidies and bailouts currently required for both over- and under-production, saving taxpayers money. Even growers’ neighbors benefit once farming stops lowering the value of their own homes.

Cruelty-free products may also become valued premium products for which premium prices may be asked.

Would you like a better life with that Whopper?

Gasteratos is undoubtedly personally invested in cell-ag, and so the report paints a decidedly rosy picture of its benefits. Even so, you wouldn’t think a new burger lunch option could make such a drastic difference in the world. 90 Reasons to Consider Cellular Agriculture may convince you it can.

Update Tuesday, April 16, 2019: The original headline for this post referred to the Impossible Whopper as being “lab-grown,” which is technically true. The plant-based burger was developed in a lab. However, a number of our readers felt the headline suggested the burger was the product of cell-ag, which it is not. To avoid any further confusion, we’ve changed the headline.

Tags
Agriculturebiotechcell-agdisaster reliefenvironmentfarmingfuturelab-grownmeatpublic healthwhopper
In this article
Agriculturebiotechcell-agdisaster reliefenvironmentfarmingfuturelab-grownmeatpublic healthwhopper
Related
Life
Our antidepressant drugs are affecting animals and ecosystems
A toxicologist explains the impacts of antidepressants on fish — and no, they’re not getting any happier.
Life
Scientists use CRISPR to insert an alligator gene into a catfish
Disease kills off 40% of farmed catfish. This gene protects them.
Hard Science
200 years of exploring Antarctica
What we’ve learning from the world’s coldest, most forbidding, and most peaceful continent.
Life
Most of the seafloor is a thick graveyard of ooze
Each year, several trillion pounds of microscopic silicon-based skeletons fall down the water column to pile up into siliceous ooze.
Health
New killer CRISPR system is unlike any scientists have seen
Once activated, the CRISPR-Cas12a2 system goes on a rampage, chopping up DNA and RNA indiscriminately, causing cell death.
Up Next
The Present
Women fear violence. Men? Ridicule.
In her new Netflix special, Amy Schumer gets real about fear.