Bitcoin is a cryptocurrency located completely online and not tied to any central bank. Its origins are shrouded in mystery and very few people predicted the popularity it currently enjoys.

Rather than being approved by a nation’s central bank, bitcoin is verified by individuals in an open ledger available for all to see. It was created in 2009 by ‘Satoshi Nakamoto‘, which is likely a moniker designed to protects the identity of its creator. Satoshi Nakamoto is a Japanese man’s name as common as John Smith in America.

After being steady for years, the price of bitcoin has taken off since January of last year, and has been on an absolute tear since November. At the time of writing, it’s over $9,000 per unit. It first broke the $1,000 threshold on Jan. 1, 2017, and reached $19,000 in December of that same year. Afterward, it lost 50% of its value, only to begin a dramatic climb back up.

Since it’s not tied to any bank, bitcoin is unregulated and its control is decentralized. As a result, bitcoin owners remain anonymous. Records of transactions, however, are accessible via a public log. But bitcoin owners’ names are never revealed; only their bitcoin wallet IDs ever become known. (A bitcoin ‘wallet’ is an encrypted bank account where one’s digital currency is stored.) People can purchase bitcoin through online exchanges hosted by websites like Coinbase, Bitstamp, and Bitfinex.

It’s not totally safe, however. Bitfinex was hacked in 2016 and $60 million worth of bitcoins were stolen. The sheer nature of bitcoin makes them untraceable, revealing another dark aspect of cryptocurrencies: the digital money has become popular among those looking to buy or sell drugs, or other black market products, online. 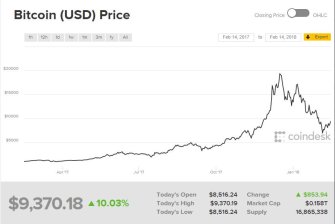 Can a person give bitcoins as a gift or use them to pay off a debt? A few small businesses accept them as payment for goods and services, and in this way, avoid the vendor charges that come with processing a credit card payment. Due to its decentralized nature, transactions using bitcoins have to be verified, which is where mining comes in. And just as with every resource, there’s scarcity.

There’s a bitcoin scarcity (on purpose)

There will only ever be 21 million bitcoin in the world. So far, about 12 million have been mined. It’s estimated that the remaining 9 million remaining will all be mined by the year 2140. Since there’s a finite supply, bitcoins are thought to gain value over time, a fact which has motivated a mining boom.

Miners use computers to solve complex math puzzles in order to verify the bitcoins used in a transaction. The first person to crack the math problem becomes the winner. As a reward, they are usually given 12.5 bitcoins. Note that a bitcoin goes to eight decimal places. As you might expect, this setup causes some competition among bitcoin miners.

Thousands of miners worldwide compete to mine any single bitcoin transaction. Think about this—every ten minutes a miner earns bitcoins as a reward for verification. The network keeps a record of each bitcoin transaction. These records are bundled together with all the others made within that same time-period. A bundle is called a “block.” Blocks are then entered into the public record in chronological order, which is known as the blockchain. You can check the latest real-time bitcoin transactions through websites like Blockchain.info. 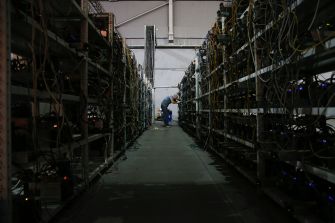 How bitcoin is mined, and where

It used to be that anyone could mine bitcoins. And while that’s no longer true, you don’t have to necessarily be proficient in computers to mine. You’d need some open source, basic software such as GUI miner. As for hardware, you need a motherboard, some graphics processing chips, and fan to cool down your rig.

But today with the heightened interest and the math problems growing exceedingly difficult, outfits with more computing power have come to dominate this activity. It’s gotten to the point where bitcoin mining centers have become the majority of the network. These are places around the world where mining takes place on a large-scale, usually where energy is either inexpensive or free. So operators pack a facility with computers, servers, and cooling devices.

Certain areas of China see many such centers due to free hydroelectric power. But the country is looking to curtail bitcoin mining, which may send operations elsewhere. Canada is one possible location. In Iceland, where bitcoin mining has become a sensation, a number of mining centers have been proposed despite officials warning that they will use more electricity than is required to power all the homes in the country. Johann Snorri Sigurbergsson, the spokesman for Icelandic energy firm HS Orka, told the BBC, “If all these projects are realized, we won’t have enough energy for it.” 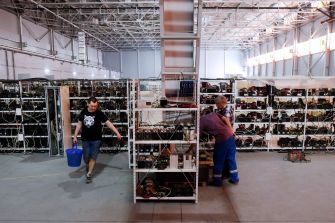 Energy is inexpensive in Iceland because it is mainly harvested from renewable sources like wind and hydroelectric power. The small population of the island, just 340,000 people, use about 700 gigawatt hours of energy annually. The proposed bitcoin centers, meanwhile, are expected to consume 840 gigawatt hours of electricity per year.

Since massive amounts of power are used, the environmentally-minded consider the practice extremely wasteful. Bitcoin mining is a smart business model because it requires no staff and a small investment. Moreover, taxes on cryptocurrency mining operations are low, although that may change, as Iceland’s politicians have been made more aware of issues surrounding bitcoin mining.

As Smári McCarthy, an Icelandic member of parliament, told the AP, “We are spending tens or maybe hundreds of megawatts on producing something that has no tangible existence and no real use for humans outside the realm of financial speculation. That can’t be good.”

One report found that all the cryptocurrency mining occurring worldwide could power Ireland for a year, but those figures may not be accurate. As a result of concerns over power usage and a lack of control over bitcoin overall, some countries such as South Korea are mulling over a system to license and regulate bitcoin transactions.

Want to get a look inside a cryptocurrency mining center? Click here.

The case for and against cryptocurrency

Bitcoin is often derided as volatile, but a new report suggests there is a method to the madness.
The Present

Bitcoin’s creator owns five percent of the entire Bitcoin supply, meaning that he has a larger percent of Bitcoin than the U.S. has of gold.
Up Next
Surprising Science

Dwarf planetary systems will transform the hunt for alien life

It would be disappointing and surprising if Earth were the only template for habitability in the Universe.