It’s been more than a decade since Satoshi Nakamoto published his/her/their famous white paper that first described a currency that solved the double-spending problem associated with digital assets. A few months later he released the first software that would launch the network that services bitcoin.

No longer would we need to rely on a trusted third party, many of which mine data and information while making our identity vulnerable to hacking. By incentivizing miners (or, as it has evolved, validators), a global, decentralized solution was presented. So long as no individual miner controls the bulk of computing power, a fair and equitable system of transacting is now possible.

The idea for a decentralized currency had been floating around for over a decade when Nakamoto published their paper. Since Nick Szabo wrote a treatise on “bit gold” in 1998, a few suspected him as the man behind the pseudonym; Szabo also devised the concept of “smart contracts,” one of the foundational mechanisms making blockchain so important. Szabo claims he’s not Nakamoto, however. Others claim they are, unsurprising since charlatans infect every industry.

The mythology of Satoshi transcends the individual. This is an essential part of the mythos driving cryptocurrency. The centralization of power and money has aided the world’s greatest problems — climate change, systemic racism, gender inequality, terrible design decisions. Eight people holding as much wealth as over 3.75 billion is not a feature of the species. It’s a bug, and bugs have consequences.

Cryptocurrency, at its best, is an imaginative response to a serious problem. Nothing new here: an exploitation of a powerful system followed by a social response. The history of humans again rhymes itself.

At its worst, the community cryptocurrency has spawned is little different than the forces it was designed to rail against: a seething enmity toward anything “other” in order to defend the precious self. Suffice it to say, at the moment crypto is dominated by men, and as with other tech sectors, biases are rampant.

As with any prospective industry, especially one ripe with potential capital, this next phase of human transacting will require civility. Sure, we’re biologically programmed to blah blah blah; understanding our point of origin is important. But as with broken hearts, the past becomes a prison and an excuse for not striving to be better.

We Are Leaving Patreon: Dave Rubin and Jordan Peterson Announcement

We Are Leaving Patreon: Dave Rubin and Jordan Peterson Announcement

Which is what Jordan Peterson, following in the footsteps of Sam Harris, did when leaving Patreon. It wasn’t specifically Carl Benjamin, aka Sargon of Akkad, that caused the Canadian professor to join forces with Dave Rubin to risk over half of his income in an attempt to create a new “freer speech” platform. It was, however, the final proverbial nail.

Peterson’s platform hasn’t panned out, yet, which is likely why he is utilizing all means necessary, including bitcoin. While he says the new platform will be similar to Patreon’s subscription model, he added that “it will have a bunch of additional features.” Perhaps this move into cryptocurrency might signal one of those features.

Peterson announced his departure on January 1 in a video alongside Rubin. Concern over Patreon’s relationship with MasterCard, something cited by Robert Spencer when he was kicked off the platform for also violating its hate speech policies, is the driving factor behind the move. Sargon just happened to be in the right place at the right time to motivate the two to leave.

Cut and dry: Patreon has a policy against hate speech. Benjamin was making money on Patreon, which was funding his discriminatory rants on Youtube. Patreon banned him.

What defines hate speech? That’s a big question no singular person is equipped to answer. We can get caught in the weeds on this — and should; language is the main vehicle by which we communicate and shouldn’t be glossed over — but like a foul odor, it’s obvious when hatred and discrimination assaults your senses.

For example, take Robert Spencer’s Twitter feed, dominated at the moment by retweets from the 2019 State of the Union. Among the things I learned from it: Twitter, apparently, has a liberal bias because both Nancy and Pelosi can trend on the platform, not just her full name; Democrats hate seeing America do well because they want to see Americans suffer; a journalist pointing out that Jews don’t believe in heaven is a reason to hate journalists; Democratic women, dressed in white to represent the suffrage movement, are actually the new KKK; AOC. Boy, does she get under their skin. 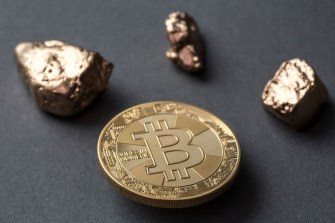 Bitcoin or gold, what is the better crisis currency? The picture shows a Bitcoin (physically) and gold nuggets. Photo credit: Ulrich Baumgarten via Getty Images

Fueled by these inspired rants, I turn to one of Sargon’s videos. He’s upset about a female-only screening of “Wonder Woman.” The “supremacist” inclination of these women, the illegality of it all. He’s clearly befuddled by the “specially-privileged women-only thing.” A moment of self-reflection occurs when he realizes it is a “petty thing to be bothered about,” at which point he goes on for another four-plus minutes about why he’s bothered about it.

I hope he never wants to exercise at Curves.

Here’s the brilliant thing about Curves, though. The successful women-only gym saved on costs by launching in suburban areas, where rents are lower; the machines are arranged in a circle around the main floor, promoting social interaction; perhaps most importantly, women don’t have to deal with being gawked at by men.

And for that, men — in many instances in such conversations, white men — feel victimized. Instead of attempting empathy, they lash out, somehow feeling taken advantage of, unfairly mistreated, and potentially the most scandalous sensation of all: vulnerable. That’s what I assessed watching a handful of Sargon videos: it all comes back to him.

Which makes Peterson’s decision to hang his hat on this totem telling. In his books and videos, Peterson offers many big-picture ideas that make a lot of sense in terms of how society operates. Yet, like Sargon, a lot of his rhetoric invokes self-victimization. Instead of opening a dialogue, he engages in constant oneupmanship, like the time he tried to teach Alex Wagner what parenting entails. As someone who rails against identity politics so often, he often gets bogged down in his own identity.

Bringing us to an intriguing paradox: the usage of a decentralized digital currency created to disassemble power structures being utilized by those interested in keeping those power structures in place. Again, unsurprising: Bank of America has filed more blockchain patents than anyone.

The difference with Peterson and others might seem more social and gender-based than economic, but those too are intertwined. The last few centuries have been about the accumulation of power and wealth by a particular race and gender. Now that they’re being asked to display empathy as the power balance shifts, they don’t like it.

We should applaud thinkers that “reach across the aisle” to ensure similar rights for those who think differently. Of this Patreon backlash, Sam Harris’s reasoning on this topic is the most clear-headed to date.

Utilizing digital currency to support the dissemination of ideas also makes sense. As thinkers that pontificate on the nature of society, they’re at the head of a long curve in which cryptocurrency (or some form of digital currency) will eventually replace fiat. How that happens remains to be seen, but this one isn’t getting stuffed back into the box.

But to pound your stake in the ground by defending men who are butt-hurt that women want to congregate without men is just silly. We shouldn’t ban speech, but we also shouldn’t eliminate common sense from the discourse. Otherwise, we’re just writing the same story over and over, one smacking of privilege with no sense of grace or compassion about the lives of others, regardless of the technological innovations involved.

Biology might point to destiny, but it’s not the total summation of it. For that, we need the thinkers we champion to make better use of their imagination.

The joy of being wrong

Arguments on social media are notorious. Can practicing intellectual humility make us smarter and happier? Science says yes.
Up Next
The Present

A network of devices called MERMAIDs is taking seismographs where they’ve never been.