Industrial Revolution 2.0: First We Electrified, Then We Cognified

There's a new verb in town: cognify. We have far too much baggage with the word 'intelligence' so to fully embrace the second industrial revolution we need to start talking about artificial cognification.

If an object has a battery in it or a plug at the end of it, it won’t be long before that item is intelligent – although Kevin Kelly, the founder editor of WIRED, questions whether intelligence is really the word we want to be using. “It’s best I think to think of these intelligences as smartness instead of intelligence, because we have a lot of baggage with the idea of intelligence,” says Kelly. He suggests a new verb: cognify, and also cognification. This is what Kelly terms the second industrial revolution. The first saw us put the power of muscle into objects in the form of energy – steam, gasoline, electricity – literally giving things like cars a certain amount of ‘horsepower’. Next, we will cognify anything that is electric. And if you think the first industrial revolution shook up the way we lived, just wait for the second one to fully set in. Kevin Kelly’s most recent book is The Inevitable: Understanding the 12 Technological Forces That Will Shape Our Future.

Kevin Kelly’s most recent book is The Inevitable: Understanding the 12 Technological Forces That Will Shape Our Future. 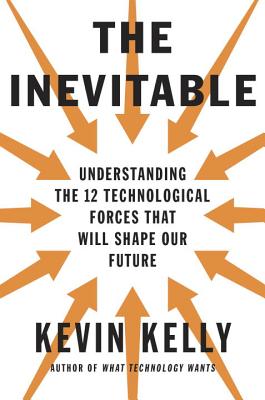 Kevin Kelly: Artificial intelligence has come into its own because we have had certain demonstrations of its power. For instance the Google AI beating the best Go player in the world which had been a goal that many people thought would not be achieved for many decades. And here it is already. Now we have examples of Amazon Echo, Alexa, Google, people talking to their machines and they’re talking back having a conversation. And so it’s now suddenly easy for us to imagine how the benefits of artificial intelligence could kind of creep into the rest of our lives. And it’s best I think to think of these intelligences as smartness instead of intelligence because we have a lot of baggage with the idea of intelligence. If we think of these as artificial smartness and everything getting smarter I think we’ll have a better idea of what we’re going to see. So we don’t have a good English word for making smarter and smarten, smartify. So I use the word cognify to mean making things smarter. And I’m suggesting that, in fact, this is a very broad verb that will apply to everything in our lives and that basically anything that we have already electrified, made electronic, automatic, we’re now going to cognify.

So the first industrial revolution was our large-scale switch from the agricultural world where anything that we made had to be done with natural power, muscle power. Human or animal muscle power. It was the only way you could make something. The big switch was we automated this and we had electronic motors, gasoline, steam engines. We had automation and we had artificial power. That’s what powered the industrial revolution was we could apply artificial power to everything.  And we made a grid to deliver that power to every farm and every home in the country, in the world. And so everything that had been done with natural power was now being done with artificial power. So movement, transportation was amplified by this new artificial power. So today when you get in your car and turn the switch you’re suddenly summoning 250 horses, the equivalent of 250 horses. Their natural power is made artificial and is going to run your car down 60 miles an hour just with your turning of the wrist. So that’s what the industrial revolution was. We took things, we took natural muscle power and we amplified them and we multiplied that by a million times and that was made everything that surrounds me right now, that surrounds the city, all that came from this artificial power.

Is the Fruit of Political Humor Hanging Too Low?