As we approach the Christmas and New Years holidays, and as our president begins his two-week vacation in Hawaii, it’s worth remembering how rare a day off is for many American workers. In fact, as a recent report puts it, the United States “is the only advanced economy in the world that does not guarantee its workers paid vacation.” Most European countries provide a minimum of 20 paid vacation days a year—the coveted 4 weeks that only the luckiest American workers will enjoy in their careers. Austria, Portugal and Spain offer 22 days of paid vacation every year, while France gooses the number up to 30.

Here is the sad story in pictures. (Note the tiny “0” for the United States on the far right of the x-axis.) 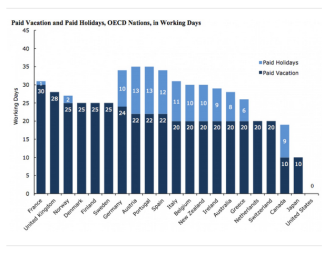 But it’s one thing not to guarantee paid vacation, you might say. That just means there’s no law requiring it. Most American workers get some vacation anyway, right? Well, yes. But maybe fewer than you thought. As Rebecca Ray, Milla Sanes and John Schmitt explain in their Center for Economic and Policy Research report, “almost one in four Americans has no paid vacation (23 percent) and no paid holidays (23 percent).” That adds up to about 26 million workers with no days off. And it’s the lowest-paid Americans who are the most bereft. Half of low-wage workers have no paid vacation. And those low-wage workers who do have paid vacation have a lot less of it than workers making more money:

These vacation gaps add insult to penury, contributing to America’s worsening economic inequality. But there is another curious development to take note of: workers who do receive paid vacation benefits don’t always use the days. Nearly half of Americans let at least some of their paid days lie fallow, throwing away opportunities for rest, relaxation or travel.

Why is the culture of vacation so weak in the United States? The phenomenon seems to stem from a combination of stingy employers, weak laws and an American free-market sensibility that counsels against government interference with the mutual arrangements employers reach with their employees. Whatever the reason America comes in dead last in paid vacation, the policy is probably counterproductive. Workers who have no opportunity for time off are sicker, less productive and less imaginative than employees with paid vacation days. Despite all those weeks sunning themselves and enjoying breaks from work, the French are among the most productive workers in the world. Likewise for the Germans, who receive not only a minimum of 20 days of vacation but also 10 paid holidays a year.

Something to chew on when you’re enjoying a break from your work routine next week—unless, of course, you don’t have the time off. If you can’t get away yourself, you can always accept President Obama’s invitation “to sit back, relax, and follow along on his 2014 Hawaii Vacation”: vicarious vacationing at its best.

NASA was dangerously cavalier about the dangers of the shuttle launches.
Up Next
Culture & Religion

Is the Cancellation of “The Interview” a Cowardly Act?

Sony Pictures has cancelled the Christmas Day release of the action-comedy film “The Interview” amid terrorist threats that may or may not be linked to North Korea.