Elon Musk and President Trump have had a complex relationship, with Musk serving on the President’s advisory councils until having to resign over the U.S. pulling out of the Paris Agreement on climate change. Now that Trump is sending America back to the moon, Musk tweeted that he supports the policy shift, pointing out how “it is high time that humanity went beyond Earth” and that “we should have a moon base by now”.

Earlier this week, on the 45 anniversary of the Apollo 17 lunar landing, President Trump directed NASA to send American astronauts back to the moon. Trump signed a policy directive that is short on details but seems to indicate establishing a lunar base, with the eventual goal of using it to go to Mars and “perhaps, someday, to many worlds beyond,” as the President said in his press conference. 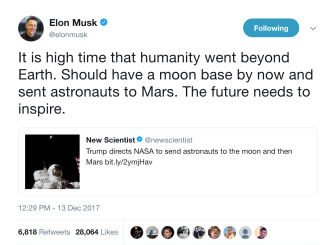 Going to Mars, has of course been a key goal for Elon Musk, who has outlined a plethora of plans on how to accomplish just that by 2023.

Related
13.8
What kind of intelligence is artificial intelligence?
The initial goal of AI was to create machines that think like humans. But that is not what happened at all.
The Present
What’s effective altruism? A philosopher explains
Some effective altruists “earn to give” — they make as much money as they can and then donate most of it to charities.
Sponsored
How to avoid family fights about money
No family is immune to money conflicts, no matter how much they love each other. Here’s what to look out for.
L&D strategy
Best practices for a needs analysis [Templates included]
Conducting a thorough needs analysis requires care, curiosity, and open-mindedness.
Neuropsych
Memory and the benefits of forgetting
Forgetfulness isn’t always a “glitch” in our memories; it can be a tool to help us make sense of the present and plan for the future.
Up Next
The Present
Ultrafast Holographic Printer Creates 3D Objects in Mere Seconds
Rather than one layer at a time, this method creates an entire object all at once, using lasers.