Imagine this, you see something online you just have to have, like a rugged smartphone case emblazoned with your favorite character. You order it and instead of waiting for it to be delivered, your 3D printer fashions it for you, to your exact specifications, in seconds. Why don’t we have this right now? 3D printers can take hours or even days to create an object, making such a scenario difficult to implement.

3D printers are still a new technology with a lot of potential. Think of the cost savings to the consumer (no shipping costs), the time saved to the producer (no need to ship things anywhere), and to the environment (saving on exhaust from trucks, planes, delivery vans, producing unsold items, and so on). Not only could it transform manufacturing but the research and development process as well. Making prototypes fast and easy would revolutionize engineering and design.

The potential is there. What’s holding up additive printing, as it’s sometimes called, is that it’s time intensive and the device is limited as to what shapes it can produce. The model we have today adds only one layer at a time. 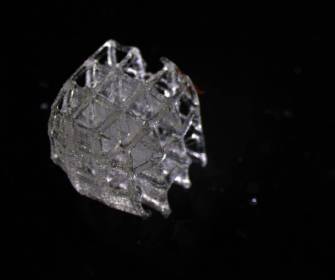 Scientists at the Lawrence Livermore National Laboratory, in California, have now come up with a novel technique that can make complex objects in mere seconds, by adding several layers simultaneously. The details are in a report in the journal Science Advances.

There are two really big innovations here. The first is using a fast drying, photosensitive resin, and the second is the unique way the lasers are employed. In traditional 3D printing, a powerful laser is used to harden the resin into plastic. Here, the printer follows a pattern set up by a 3D laser model. Creation takes place inside a tank full of liquid resin.

Three weak lasers are used, so the resin doesn’t cure. Instead, it creates a holographic effect, forming a 3D model of what’s to be made inside the tank. Anywhere where the three lasers are made to come together unites them into one strong beam, which hardens the resin. In this way, rather than one layer at a time, multiple layers can be fabricated at once by orchestrating the lasers into complex patterns. This method can allow for pinpoint accuracy.

Once the pattern is complete, the lasers harden the resin in seconds, and the unused liquid is drained away, leaving the finished product behind. The process works with metal as well. But it’s a little different. Here, the lasers arrange metal dust into a pattern. Once complete, the dust is condensed into a solid by a laser or electron beam. 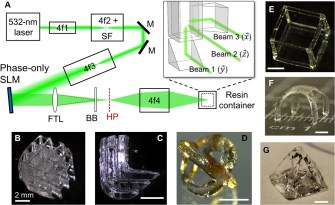 LLNL engineer Maxim Shusteff led the study. He told New Atlas, “The fact that you can do fully 3D parts all in one step really does overcome an important problem in additive manufacturing.” Not only is the new technique faster and able to create a wider variety of shapes, it eliminates the need for support structures current 3D printers often need to fashion objects. In addition to lattices, beams, squares, and other structures, it could be used to make something complex with moving parts, like a gearbox. Another advantage, it can print multiple objects at once, such as a set of chess pieces.

The objects made via volumetric 3D printing, as the technique is being called, aren’t yet able to produce as sophisticated a product as some commercial 3D printers out there today. Really, this was a proof of concept study. But Shusteff and his team believe they can reach the same level of resolution with their process. Future models may use LEDs rather than a complicated laser array, as the latter is expensive. Also “laser speckle” or when a laser interferes with itself, can cause noise and result in surface roughness on printed objects.

So far, Shusteff and colleagues have made a few shapes on the millimeter scale. Though the amount of power needed may steer entities away from using this technique for heavy manufacturing, it would be useful for creating biomedical implants, which need to be flexible and yet high resolution. Another option could be bioprinting living tissue. “We’ve taken a really good first shot at this,” Shusteff said, “but we’ve not yet taken it to the limit of its performance, so the space is wide open for us and others to demonstrate what this approach is capable of.”

The four-color theorem was one of the past century’s most popular and enduring mathematical mysteries.
Strange Maps

At least 222 typefaces are named after places in the U.S. — and there’s still room for more.
The Future

Buildings don’t have to be permanent — modular construction can make them modifiable and relocatable.
The Future

This programmable fiber has memories and can sense temperature

Researchers were even able store and read a 767-kilobit full-color short movie file in the fabric.
Up Next
Health

Even If Genes Affect Intelligence, We Can’t Engineer Cleverness

First, let me tell you how smart I am. So smart. My fifth-grade teacher said I was gifted in mathematics and, looking back, I have to admit that she was […]