A couple of years ago, Elon Musk stunned an audience, and the world, with his belief that there’s just a “one in billions” chance that we’re not living in a massive simulation a la The Matrix. Respected astronomer Neil deGrasse Tyson agreed. The reaction was intense, with a handful of experts shouting “me, too,” another handful saying “nope,” some, such as Bill Nye, asking how we could ever know, and the rest of us more than a little freaked out. Now, though, with the unveiling of the eye-popping OASIS virtual-reality (VR) world in Steven Spielberg’s Ready Player One, a lot of people are asking, “Where’s my simulated reality?” While Ready Player One is fiction, many are wondering if something like OASIS is possible, if not as a place to live, at least as entertainment. If so, when will we see our first immersive VR movie?

Short answer: Not soon. The technology’s not there yet, and there are some intriguing creative issues to be decided as well, including some very basic ones. For example, where’s the dividing line between a game and a movie? Does a game involve interaction with the virtual world while a movie is viewed passively? There was a period not too long ago when Hollywood experimented with interactive movies where audiences would vote on characters’ behaviors and thus “write” the film’s outcome. Nobody cared. If a movie is a passive experience, does the viewer move through it, requiring a sense of motion and interaction with VR objects, or remain stationary?

It’s likely any such entertainment would need to be VR, and not augmented reality, AR, which intertwines with physical reality, for reasons of creative control. It would be so much harder to sustain the effect of standing on the scorching side of a fictional volcano, for example, if the family cat suddenly wandered in.

The tech side of the question

Experts agree that current internet bandwidth is far too limited to deliver the requisite humongous amounts of data to homes across the globe. Akamai’s 2017 State of the Internet found that the average internet speed is 7.2 Mbps (Megabytes per second). Even a low-resolution 360° version of VR, the kind supported by current headsets, demands at least 25 Mbps. To match the resolution of HD TV, you’re talking 80-100 Mbps, and to achieve 4K quality, each connection would have to provide 600 Mbps of bandwidth. If 75% of the earth is connected, you need to multiply that figure by 5.5 billion. 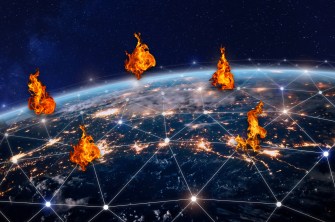 Those figures represent delivery of a fully detailed 360° view, which isn’t what Ready Player One shows. Instead, it depicts “micro worlds” full-scale rendering only of objects and characters near to the viewer. The key is finding the most workable “Level of Detail.” This approach cuts down bandwidth requirements significantly and is already the way multiplayer games such as Destiny operate.

Experts believe the internet will become far faster over time, but that’s a lot of data to move in any event, so we’ll have to wait and see if we get there.

Any lag in response time or visuals in VR breaks the illusion that you’re really there, and there’s a tremendous amount of data to be processed at the server level. The servers will not only be feeding content to each player but also receiving interactive content from them — if we’re talking about interactive VR movies — and then combine it all in a believable way before spitting it back out to all participants near-instantaneously. And with millions, billions, of participants, obviously this is a massive processing challenge. It can be partially solved by sending, receiving, and crunching only what’s changed at any given moment as a sort of update to data the participants have already received.

Processors are getting faster all the time, of course, but they’ve got a way to go to be able to accomplish this feat without a disruptive lag.

Well, at least this is unlikely to be a problem. VR worlds will likely either be completely computer-generated or digitized from standard video and something like the motion-capture technology that’s currently so popular and that has already been delivering VR characters for some time.

Goggles are rapidly improving, so a sense of movement looks doable in the near future. Companies are developing omnidirectional treadmills like the one trod by the Ready Player One’s lead human.

Sensory, or “haptic,” feedback in the form of the gloves and suits worn by players in Ready Player One seem plausible, too. Haptic gloves exist already, and one company, Teslasuit (no relation, and trademark suit likely inevitable), is bringing to market a full-body haptic suit that resembles those in Ready Player One. 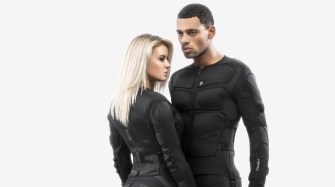 Far harder to get right is “interactional synchrony,” a phrase used by Jeremy Bailenson in his book, Experience on Demand. It’s the process of accurately discerning and responding to others’ non-verbal cues. He tells Gizmodo, that “body movements—subtle shifts in posture, eye-gaze, and gestures—not only dance to the rhythms of speech but they also perform in reaction to the movements of others. In fact, these movements, both subtle and obvious, are correlated between people at a highly intricate level.” He says that achieving an authentic sense of “social presence” is the holy grail for VR developers, and remains a tricky problem. That’s because, as Variety notes, current “VR is terrible at capturing your emotional state.”

As new technologies emerge, it typically takes a generation of consumption before artists begin to emerge for whom the whole thing is second-nature. There’s no reason to expect that some years from now we won’t see young adults who will find VR a natural platform for their stories and ideas, and — should the technical issues have been resolved by then — that would be when we might expect VR movies.

How real is the right amount of real?

In Ready Player One, the OASIS VR world is fantastic enough that it’s usually easy to differentiate from real life: It’s so much nicer. On the other hand, Netflix’s Black Mirror specializes in great episodes about VR that’s so realistic it’s indistinguishable, or almost so, from reality. Season 3’s unforgettable San Junipero uses VR to raise some profound questions about the value of life, and Season 4 has a wonderful VR episode we won’t spoil by identifying.

How realistic would you want a virtual reality movie to be?

That having been said, there would be a tremendous amount of creative effort involved in designing entire worlds of convincing VR. It took Pixar six years to bring Coco to the screen with a team of hundreds of people, and that’s just 2D and 3D. 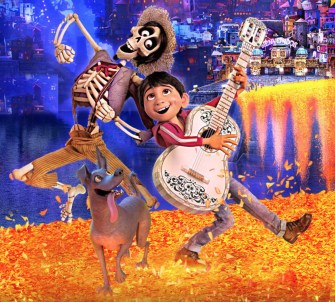 The Pixar artists started with absolutely nothing: no sky, no ground, no grass, etc. Everything had to be deliberately created, and even with pre-developed elements, there’s a Herculean effort involved, a challenge that would only be greater with a VR movie. Creating a full-length VR feature looks like it would be an absolutely massive — read “expensive” — undertaking.

When will we see a virtual reality film? Patience. It’s just too hard right now, and limited demos of the idea, such as director Alejandro González Iñárrit’s installation Carne y Arena, notwithstanding, we’ll have to wait a while for a generation that will grow up with the necessary skills, vocabulary, and aesthetic.

Related
The Learning Curve
Why do high IQ people stagnate in their careers? Emotional intelligence
Research suggests that emotional intelligence is more vital for success than IQ.
The Present
Even in the age of AI, some problems are just too difficult for computers
Computers are growing more powerful and more capable, but everything has limits
The Future
How the metaverse will revolutionize K-12 and higher education
Imagine going on a tour through the human circulatory system as a tiny cell. That is just one example of education in the metaverse.
Starts With A Bang
Ask Ethan: What are white holes, and do they really exist?
In General Relativity, white holes are just as mathematically plausible as black holes. Black holes are real; what about white holes?
Life
Strange life forms create an “alien” ecosystem in an abandoned uranium mine
Slimy biofilms made up of bacterial and eukaryotic life forms have taken over an abandoned, flooded uranium mine in Germany.
Up Next
Technology & Innovation
Criminals use drones to swarm FBI agents during hostage raid
The flying drone attack marks one of the latest cases in which criminals have been using consumer models to facilitate illegal activity.