A gang of organized criminals used drones to disorient and surveil an FBI rescue team during a hostage operation, a case that illustrates how drones are increasingly being used to aid criminal activity.

The FBI team was responding to a hostage situation unfolding on the outskirts of a large U.S. city. Agents arrived and set up an elevated position to monitor the situation, but were soon buzzed by a swarm of small drones that swooped past them in a series of “high-speed low passes at the agents in the observation post to flush them,” Joe Mazel, head of the FBI’s operational technology law unit, told attendees at the AUVSIXponential conference in Denver.

The fly-bys rendered the agents disoriented.

“We were then blind,” Mazel said. “It definitely presented some challenges.”

The suspects then used the drones, which they had backpacked to the scene prior to the crime, to monitor the agents’ positions and activity, relaying the information to other suspects in the area, according to a new report from Defense One.

“They had people fly their own drones up and put the footage to YouTube so that the guys who had cellular access could go to the YouTube site and pull down the video,” Mazel said, later adding that further details of the case remain “law-enforcement sensitive.” 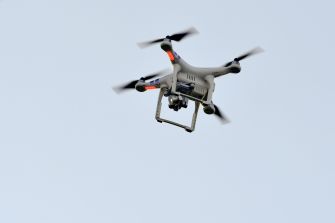 It’s far from the first time consumer drones have been used in crimes. Thieves have been using them to plan robberies by scouting out security weaknesses in houses and commercial buildings. Inmates have coordinated schemes with accomplices on the outside to fly drugs into prison yards and cell windows. And voyeurs have been caught using drones to peep into bedroom windows, or spy on women sunbathing on rooftops.

Mazel noted that Australian smuggling groups have been using drones to monitor port authority workers, calling in a fire or some other security threat if officials get too close to a shipment of contraband. Also at the conference was Andrew Scharnweber, associate chief of U.S. Customs and Border Protection, who described how Mexican cartel members are using drones to exploit gaps at the U.S. border.

“In the Border Patrol, we have struggled with scouts, human scouts that come across the border. They’re stationed on various mountaintops near the border and they would scout…to spot law enforcement and radio down to their counterparts to go around us. That activity has effectively been replaced by drones,” he said, adding that cartels were able to use drones to smuggle narcotics across the border with “little or no fear of arrest.”

As drone technology continues to evolve and become more affordable (entry-level models currently sell for under $200), it remains unclear whether law enforcement will be able to do much of anything to thwart the illicit use of drones. However, new amendments in the latest version of the FAA reauthorization bill could change that.

One amendment would make it illegal to “weaponize” consumer drones, while another would require operators who fly drones out of their line of sight to broadcast their identities, making it easier for law enforcement to connect drones to back to their owners. Multiple organizations have already suggested implementing this kind of “electronic identification framework,” as drone manufacturer DJI dubbed it in a 2017 proposal.

What remains to be seen is whether criminals will be able to cheat such identification systems, or skirt them altogether.

Related
The Learning Curve
Why do high IQ people stagnate in their careers? Emotional intelligence
Research suggests that emotional intelligence is more vital for success than IQ.
The Present
Even in the age of AI, some problems are just too difficult for computers
Computers are growing more powerful and more capable, but everything has limits
The Future
How the metaverse will revolutionize K-12 and higher education
Imagine going on a tour through the human circulatory system as a tiny cell. That is just one example of education in the metaverse.
Starts With A Bang
Ask Ethan: What are white holes, and do they really exist?
In General Relativity, white holes are just as mathematically plausible as black holes. Black holes are real; what about white holes?
Life
Strange life forms create an “alien” ecosystem in an abandoned uranium mine
Slimy biofilms made up of bacterial and eukaryotic life forms have taken over an abandoned, flooded uranium mine in Germany.
Up Next
Technology & Innovation
Murder in virtual reality should be illegal
In an immersive virtual environment, what will it be like to kill?