As described on “Know Your Meme” , this one comes from a Big Think video on You Tube, which someone edited into an animated gif and distributed on Reddit. Someone else then turned it into the following illustration, which is all over the internet, featured on t-shirts, and generally going viral in a massive way. 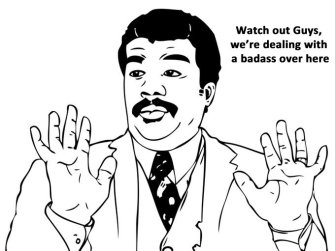 From Know Your Meme:

Neil deGrasse Tyson Reaction is a rage comic character and reaction face of astrophysicist Neil deGrasse Tyson making a defensive gesture. It is sometimes associated with the catchphrase “Watch out guys, we’re dealing with a badass over here” that is used to mock arrogant and boastful statements that people proclaim on the Internet (see also So Hardcore).

The outline drawing was taken from an interview with the online knowledge forum Big Think on living and longevity that was uploaded to YouTube on June 3rd, 2011. The non-plussed reaction can be seen at 1:32 in the following video when Tyson explains how Sir Isaac Newton invented calculus before his 26th birthday:
SO WHY DRAG SALMAN RUSHDIE INTO THIS?
We love Salman Rushdie. He visited our studios in November 2010 and spoke on a variety of subjects, including “Do Chicks Dig Fatwas?”

“@Shteyngart Do you and @SalmanRushdie and other badass authors really just hang out?” you have no idea of the depths of our joint badassery


Our own Jason Gots (@jgots) responded with:


Which sparked a veritable twittstorm of retweets and responses, including:


Totally delighted with all this, Jason closed with:

Then went to sleep.

Now, most likely as a result of all this, #badassery is all over twitter. And may soon go viral everywhere. Check it. And Salman Rushdie is the source. This is truly an extraordinary age we live in.
Related
The Present

From boosting empathy to improving therapy, virtual reality is poised to change our ideas of the self.
Starts With A Bang

Made from concrete, it cost 15% less per square foot to construct than a typical house.
Up Next

Must Leaders Be Nice to Succeed?

Barney Frank, the outspoken Congressman from Massachusetts, has resigned after three decades as a legislator. Even his allies say his abrasive manner stood in the way of reform.