Few things are infuriating as traffic. Think about all the hours lost over a lifetime just sitting there, instead of being home, enjoying some quality time with your partner, or having a drink with friends. By the 2030s, this irritating tableau might be eliminated in two of the world’s most dynamic cities. Instead of pounding your steering wheel in a traffic snarl, you could be whisked away in a flying taxi, where you’ll sit back and relax, as the city skyline opens majestically before you.

Sound fictitious? It’s slated to become a reality. Singapore is investing in flying, driverless drones, which could take riders anywhere in the city. Officials unveiled their plan at the second Business Times Leaders’ Forum recently. An official at the Ministry of Transport reported they are in talks with companies, presently.

Singapore is a relatively small city with a high population and a tremendous traffic problem, which is expected only to worsen over time. What’s more, land and manpower constraints have hampered alleviation projects. This plan therefore is an ingenious workaround. Permanent Secretary Pang Kin Keong unveiled the lion city’s proposal. Artificial intelligence and the ubiquity of data are already beginning to disrupt the transportation sector, worldwide, according to Mr. Keong. 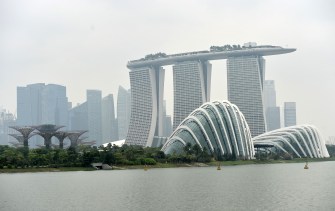 An on-demand bus system is also in the works. This will be for off peak hours and areas of low ridership. More information about that program should come out later this year. Other possible plans currently being tested are driverless pods and self-driving taxis.

Though these systems would be introduced, the city’s rail system will remain, the official stressed. This will merely augment the transit system. In this model, car ownership is deemed superfluous as all the expenses and headaches that come with it are no longer worth it.

Instead, one might have a series of apps on their phone which could offer on-demand air and land-based options. One’s selection would depend on distance, time constraints, and the traveler’s needs. “There is going to be a significant shift in the public mindset from one of ownership of transport assets – which is the mindset today – to one of procurement of transport services as and when you need them,” Mr. Keong said.

The Hoverbike Scorpion-3 is one proposed model. See its promo video here:

Three prototypes, mostly Autonomous Aerial Vehicles (AAV) are being considered. The first is the Hoversurf Scorpion, brainchild of a Russian startup. It looks like the result of an unblessed union between an exercise bike and an unusually large drone. One of the advantages is it can perform a vertical takeoff and landing.

It’s a motorcycle size frame one sits on, but instead of wheels, it’s a quadcopter. A projection from each of its four corners carries a propeller which hurls it aloft. It’s as if you were riding a motorcycle through the air. One question, what do you do when it rains? The company’s website has an impressive drone taxi design, but this is still in the works. 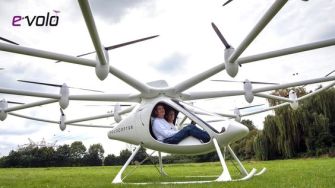 The next is the Volocopter VC200, developed by the German company e-volo. The bottom portion is much like a helicopter with cockpit and runners. But on top, 18 electric rotors give it propulsion and flight. It does look elegant if somewhat ridiculous. But if you’ve ever wanted to depart in a fashion worthy of a bond villain, this option is for you.

The last and according to yours truly, the most likely candidate, is China’s Ehang 184 AAV. Videos of this self-flying drone have been making its way around the internet. It’s a one-seater with a small, sleek cockpit, runners, and four arms, one jutting out of each corner, carrying two propellers, one at the top of the arm and another on the bottom. Just type in your destination and the drone does the rest. 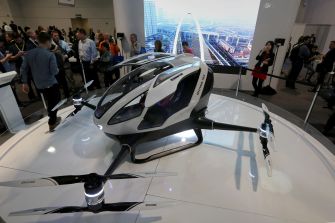 Dubai’s Road and Transport Authority (RTA) is beating out Singapore’s timeline, saying it will offer 184’s, in limited airborne taxi service, by the end of the year. But the RTA hopes that such trips will make up a quarter of all transport in the city by 2030. Little more has been revealed about Dubai plan.

In both plans, such vehicles will go through extensive testing. The details of the aerial network within each and emergency measures, should one malfunction, still need to be worked out. Even so, the governments in both cases seem confident that they’ll reach their goals.

Uncertainty is inherent to our Universe.
Up Next
Life

Here’s Why Evolution Can Be “Survival of the Friendliest”

The state of nature isn’t a “war of all against all.” Even no-brainer bacteria “know” that sometimes the game is “Survival of the Friendliest”