The purchase was made in the name of safety and convenience: It was a hands-free can opener that, with one touch of a button wobbled itself around the can, removing the top and its hazardous raggedy edges. But the edge it left—though, yes, not ragged—was nonetheless sharp enough to slice its poor user’s index finger right open. Entering a kitchen shouldn’t mean taking your life into your hands. But, actually, it apparently does. Porch, “a free home network where homeowners and home professionals can connect to get the job done,” recently crunched the data from the 2017 U.S. Consumer Product Safety Commission’s National Electronic Injury Surveillance System (NEISS) and discovered a secret chamber of horrors. Your kitchen.

All the infographics in this article are by Porch.

Kitchen items responsible for the most ER visits

It’s no surprise that knives, with their bloody history as weapons, are far and away the most dangerous things in our kitchens—they were responsible for some 322,562 ER visits in 2017. It’s the rest of the top 20 that’s eye-opening. For one thing, every single item on the list sent people to the hospital in the U.S. in a single year at least 3,500 times. Toothpicks: 6,765 incidents? Yipes.

The shortlist of sub-3,500 injurers begins with aluminum foil, which is a puzzler, frankly. 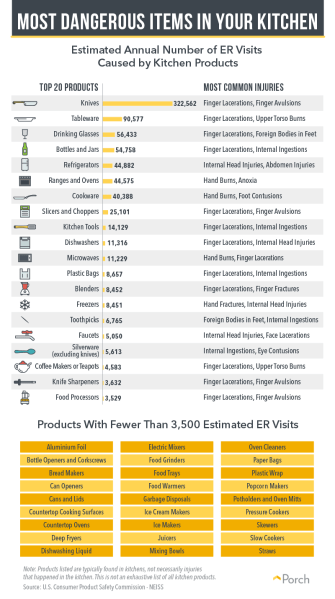 Special mention should go to the mandoline slicer which can cut you if you just look at it. It’s surprisingly not on the list, unless it’s under the ominously vague “kitchen tools.”

Where does it hurt?

With all of these things ready and waiting to dole out the boo-boos, certain parts of the victims’ bodies seem to be more at risk than others. Fingers, of course, get diced and sliced all the time. But the #4 item on the list above really gets around: when it comes to your crotch, watch out for bottle and jars. Also, guard your toes. And eyes? 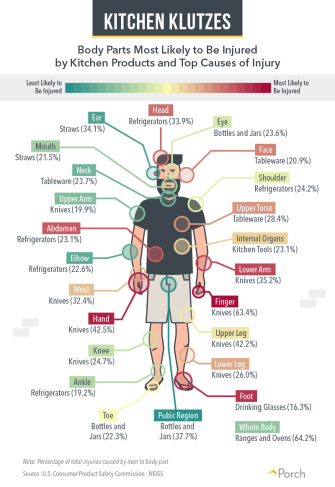 So there you are, guarding your nether regions from bottles and jars, and then you realize that though most kitchen items are pretty simple beasties some of them have sort-of brains. Is that microwave up to something? Slow cooker, this side-eye is for you. So are you feeling lucky? Here are the odds that some appliance is out to get you. That refrigerator’s not nearly as innocent as it looks. It’s got the highest likelihood of injuring you. 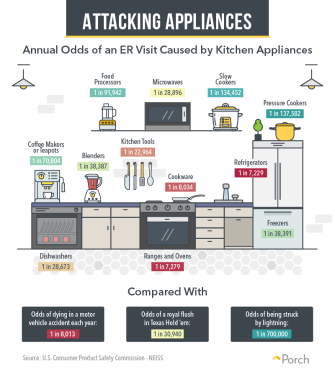 Injury by age group and gender

First of all, millennials, things are rough enough, but you’re also the group most likely to sustain an injury from a kitchen item. People age 29 are the ones most often heading to the ER. Your bugaboos are knives, tableware, drinking glasses, cookware, and, oh c’mon, bottles and jars. By the way, not one single age group doesn’t have a problem with bottles and jars. 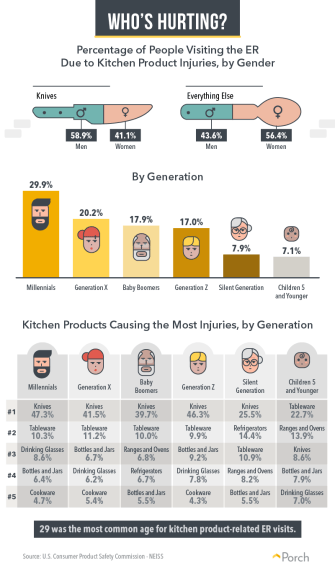 Men get cut more often with knives, but women sustain the most overall injuries. There are conjectures we could make from that last sentence, but that’s all they would be: Are men clumsier than women, were women more often the ones in the kitchen in 2017? We just don’t know.

Volunteer to cook in February

It’s the month with the least related ER visits. Don’t offer in November or December, and for the love of all that is good, not on Christmas Day or Thanksgiving, either. If you do get caught in the kitchen over Yuletide, try to make it Christmas Eve; it’s just half as dangerous as Christmas Day. 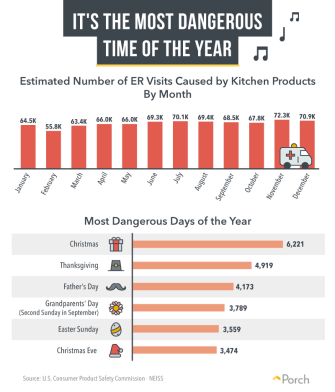 Well, you have to eat. And you can’t stick someone else with the job all the time, and you (probably) can’t afford to dine out for every meal every day. Maybe we should just be more careful, and consider that most kitchen implements have as their core function cutting, smashing, slicing, grinding, or heating something to an unnatural level. You can’t blame them for pursuing their bloody little destinies. Except for bottles and jars—they seem to be totally out of control.

Engaging in a brief mindfulness exercise made people who identified “I/me” words 33% less likely to volunteer.
Up Next
Technology & Innovation

The worlds of sports and technology collide for a good international chuckle.