The Boring Company, a venture by Elon Musk, has received the green light to build a hyperloop from Washington, D.C. to New York City that will cut transportation time to about an hour, with possible Baltimore and Philadelphia stops as well. The construction, if and when it happens, could take five or more years.

So what is a hyperloop? It’s a patented magnetically levitated vehicle, similar to a train, that basically runs within a vacuum, almost free of air resistance and friction. 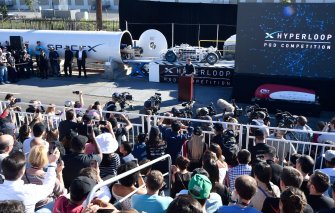 SpaceX CEO Elon Musk(C) speaks during the SpaceX Hyperloop pod competition in Hawthorne, California on January 29, 2017. Students from 30 colleges and universities from the US and around the world are taking part in testing their pods on a 1.25 kilometer-long Hyperloop track at the SpaceX headquarters. (Photo: GENE BLEVINS/AFP/Getty Images)

The concept was first published in August, 2013, for a possible route from San Francisco to Los Angeles. It never actually got off the ground, but in the meantime, some design concepts have come out and are being worked on by students, and some “pod” competitions have developed their own innovations. The entire idea of a hyperloop was created with the plan to keep it “open source” so that innovators could step up and come up with new ideas.

In fact, on January 29, 2017, one prototype was demonstrated by MIT researchers. Here was that run, looking for all the world like a scene from THX-1138.

The permit filed will allow the Musk-owned Boring Company to start excavating a site at 53 New York Avenue NE. Another possible construction being debated right now is for a hyperloop craft to shuttle people from downtown Chicago to Chicago’s O’Hare Airport, which would save hours of travel time in heavy traffic.

Also announced this week was a planned hyperloop between Pune and Mumbai in the Indian State of Maharashtra by the company known as Virgin Hyperloop One, owned by Richard Branson. Chief Minister of Maharashtra Devendra Fadnavis describes what it could do for the region:

“With Virgin Hyperloop One, we can create a sustainable infrastructure that will enhance the State of Maharashtra’s competitiveness and attract new investment and businesses,” says Fadnavis. “The Pune-Mumbai hyperloop route will be an economic catalyst for the region and create tens of thousands of jobs for India’s world-class manufacturing, construction, service, and IT sectors and aligns with Make in India initiatives.”

Have you ever stopped to think about how we keep time? Ever wonder why Easter changes dates every year? Well, let us tell you a little story about the Gregorian Calendar.