Autonomous cars are coming down the pike, and they’re going to change our lives in so many ways. Consider that 94% of all car accidents are due to human error. Self-driving cars are expected to be safer, more reliable, and much more environmentally friendly. They might also cut down on traffic and commutes.

So when will fully autonomous, self-driving cars be introduced? Elon Musk said Tesla’s model will be ready by 2019. But, he also admitted in an August earnings call, that the unveiling is likely to be delayed. One advantage, all Tesla models come with the hardware to become fully autonomous, when the capability is available.

A recent analysis predicts that self-driving cars will be noticeable by 2020. Yet, they aren’t expected to be ubiquitous until 2040. By then, 95% of all cars on the road will be autonomous. Meanwhile, self-driving trucks are already making deliveries from Texas to California. 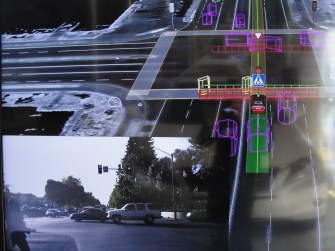 Self-driving cars use an array of sensors and cameras to maneuver within the environment. Credit: Getty Images.

Although tech companies like Apple, Google, and Uber have jumped into the autonomous vehicle game, analysts say traditional automakers have a leg up, mostly because they already have the infrastructure required to pump out millions of such cars per year. Ford is now going one step farther. The company has filed a patent for an autonomous police cruiser.

The website Motor 1 broke the story. Writer Christopher Smith discovered Ford’s plan while leafing through the company’s most recent patent applications. The cruiser will require a complex A.I. system which has yet to be developed.

It needs to be at a level 4 of autonomy or better. This is when the car can handle itself, without a human constantly controlling it. But a driver may be required for some functions. At level 5, a human is not required at all. Ford and GM are developing level 4 and 5 models, as is a company called Waymo.

The self-driving cop car would be supported by an elaborate system, including on-board and roadside sensors and surveillance cameras. These would detect infractions. Depending on the type and level of violation, the car would decide whether to go in pursuit or remotely issue a citation for an infraction. 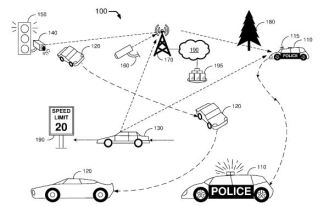 Relying on wireless, vehicle-to-vehicle communication, the autonomous cruiser would be able to pull up your driver’s license information (if your car wasn’t self-driving), check your speedometer, and even get footage from red light cameras along your route. Then, it would decide what to do.

There’s been no word yet on how it will make such decisions. Not only could this lead to the loss of jobs for police, but it would spell the end of the time honored tradition of roadside arbitration. At least today, you have a chance at talking the cop out of a ticket.

Ford believes the vehicle could help find highway patrol officers better places to hide from passing motorists, and the self-driving option might free up an on-board officer, who would spend his or her time performing tasks that the computer doesn’t do well. Giving such technology powers over the public generates a lot of questions and anxiety.

Could it get hacked? Would freeing up the officer allow him or her to look more closely into passing motorists’ immigration status, and whether or not they have outstanding warrants? Would the robocar understand special circumstances, such as an anxious husband rushing his pregnant wife to the hospital? Another question is exactly how fair such a system would be.

Although on the surface, A.I. looks as if it’s free of the prejudices normal humans carry, research has shown quite the opposite. A.I. adopts the biases of programmers and any humans it interacts with. Considering problems with racial profiling and systemic racial injustice in the criminal justice system, there’s a fear that such a vehicle would merely extend inherent biases, perhaps in a way that’s trickier to recognize.

Keep in mind that not every patent leads to a finished product. Still, these are elements to weigh carefully, should a Robocop on wheels become a reality for everyday motorists.

It could analyze a photo of the Martian surface in just five seconds. NASA scientists need 40 minutes.
Thinking

What if you are the only person in the world who can think?
Life

The Rijksmuseum employed an AI to repaint lost parts of Rembrandt’s “The Night Watch.” Here’s how they did it.
Up Next
The Present

Hasbro is releasing a Cheaters Edition Monopoly that encourages players to get ahead in any way they can.