Recent news reports featured a game of chicken played between the Greek government and the European Central Bank, but an unreported feature of the Greek debt story was the involvement of Goldman Sachs.

In 2001, the American finance firm offered to loan Greece $2.8 billion to cover immediate debts. By 2005, the amount due on the loan had risen to $5.1 billion, according to Robert Reich.

He claims that Greek debt was caused in the first place by “years of corruption and tax avoidance by its wealthy. But…” 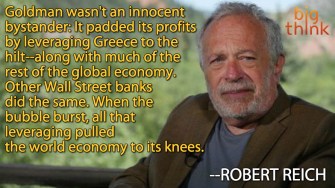 The complex financial tool used to leverage Greek debt, called “cross-currency” or “interest-rate” swaps, was also used by JPMorgan in an agreement with Italy in the 1990s. But so-called swaps have given American public institutions unfavorable terms as well.

The Detroit Water Department had to pay Goldman and other banks penalties totaling $547 million to terminate costly interest-rate swaps.

The Chicago school system … must pay over $200 million in termination penalties on a Wall Street deal that had Chicago schools paying $36 million a year in interest-rate swaps.

A deal involving interest-rate swaps that Goldman struck with Oakland, California, more than a decade ago has ended up costing the city about $4 million a year, but Goldman has refused to allow Oakland out of the contract unless it ponies up a $16 million termination fee.

Nobody questions the freedom, responsibility, or necessity of entering into binding contracts, but would public entities have knowingly entered into such agreements knowing the potential downfalls?

Apparently not, as Greece refused an overture from Goldman in 2009 that offered another financial instrument that “would push the debt from Greece’s healthcare system far into the future.”

The moral question is whether private institutions should profit when public institutions make poor financial choices. War profiteers have long been shamed. When will we start to decry debt profiteers?

An inclusion expert explains why women of color are held back.
▸
7 min
—
with
Ruchika Tulshyan
Up Next
Surprising Science

Infants whose mothers used drugs during pregnancy are often born already addicted to those substances. After birth, an analysis of the detached umbilical cord can determine what severe physiological withdrawal symptoms can be expected.