You were probably told in school about how the first people reached North America over ten thousand years ago. The explanation most history or social studies teacher’s gave was that they crossed what is known as the Bering Strait Land Bridge (the Beringa) from Siberia to Alaska. This has been the prevailing theory since the 1930s.

There is DNA evidence to support that people did in fact cross the Beringa and may even have lived on it for thousands of years, following herds and making their way little by little. They hunted large game such as mammoths and bison down into the North American continent, spreading out from there. But did the first Americans really come this way? Though your teacher might have been sure, the theory today is hotly debated.

A new study in the journal Nature gives striking evidence that casts it into doubt.  University of Copenhagen researchers Eske Willerslev and Mikkel Pedersen and their colleagues discovered that the Bering Strait route would have only been passable 12,600 years ago. That is when the first flora and fauna emerged in the region, which would supply the migrants on their journey. Meanwhile, oodles of evidence shows human beings inhabiting the Americas hundreds of years before. 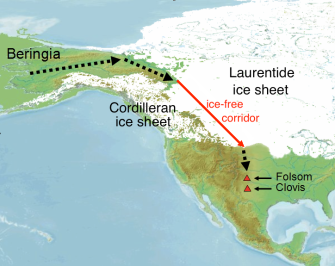 Radiocarbon dating puts the first human groups in North America as early as 15,000 years ago. Some experts theorize that they may have arrived farther south, somewhere along the Pacific Coast. To investigate further, Danish researchers drilled nine sediment cores from two frozen lakes in Western Canada. These were among the last surfaces covered by glaciers during the last Ice Age, by the Cordilleran and Laurentide ice sheets. That was approximately 15,000 years ago. With the ice retreating, some 1,500 km of pathway became passable from Western Canada down into the interior.

With these cores in hand, researchers were able to determine the exact conditions along the Bering Strait route including what plants and animals, algae, pollen, and more lived there at the time. The core samples were studied using radiocarbon dating and microscopy. Researchers were also able to extract DNA from the frozen soil. 12,700 years ago, there was no longer any ice.

But the only plant life on the Beringa were patches of grass. As time rolled on, other flora such as willow and sage brush slowly began to inhabit the land. It soon became more like a Central Asian steppe than a barren waste. Bison arrived on the scene around 12,600 years ago. At this time, experts say, the land bridge contained enough resources to sustain people taking such an epic journey. 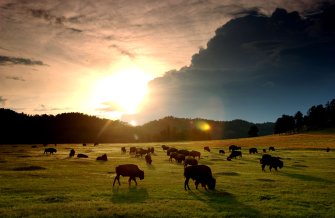 Ancient migrants across the Bering Strait would need to have a steady food supply to make the journey.

Somewhere around 10,600 years ago, the land bridge became inhabited by small mammals such as voles and jackrabbits. Then elk and mammoths arrived on the scene, followed by bald eagles and other predators. By 10,000 years ago, dense pine forests took root, making passage for big game and their human predators much more difficult, if not impossible. Due to this, researchers conclude that the route could only be passable between 12,600 and 10,000 years ago. For 80 years the Clovis people were considered the progenitors to all Native Americans. Now this “Clovis First,” hypothesis is on shaky ground.

In 2014, a 12,000 year-old skeletal was found in a Mexican Cave. Its genetic ancestry matches that of Native Americans. And in Southern Chile, the Monte Verde site dates back 14,000 years, if not earlier. And so the land bridge may not have been a viable route for long enough for people to make it as far as Southern Chile, given the time-frame in which they arrived.

Another theory is the Solutrean hypothesis which states that those first to colonize North America came from Europe rather than Asia, crossing the North Atlantic by boat. But today, anthropologists are leaning toward a Pacific coastal landing. Tom Dillehay of Vanderbilt College was the first archaeologist to counter the Clovis First Model. He did so through excavations conducted at Monte Verde in Southern Chile.

One theory is that those first migrants may have taken the Beringa, but only followed the beaches instead of traversing the land. The ice would have lifted first at the shoreline and fish would have been plentiful as a food source. Another theory is that they followed the land bridge by boat. Once the land was inhabited by enough game to support them, the migrants may have moved from the water to the land. It could also be that an earlier people followed the beaches in a first wave of migration while the Clovis people came later, via the land bridge. Or the first travelers might have come down the Pacific Coast, while a breakoff group sometime later doubled back, once it was passable, back to Alaska.

Another study has further shaken the Clovis First Model. DNA evidence has shown an ancestral link between Native Australians, New Guineans, and the Suruí, Karitiana, and Xavante peoples of the Amazon. This is not a complete surprise. Some anthropological and linguistic evidence suggests a connection between the Stone Age peoples of Southeast Asia, Australia, and South America. For instance, the “Kennewick Man,” of Washington State, a 9,500 year-old skeleton, seems to have more in common with the Ainu people of Japan than of any Native Americans.

Investigators say that remaining questions may be resolved by further comparing DNA found at different archaeological sites. Yet, many challenges remain. The oldest human settlement in the Americas is the Topper Site in South Carolina, dating back 15,000 years. How the people got there remains a mystery. The takeaway is that current theories are ever-evolving and highly speculative. Since evidence is sparse, and there are weaknesses and discrepancies in genetics, artifacts, and even dating methods, it may be some time before we know for certain the origin and migratory patterns of the first people to inhabit the Americas.

To learn more about the first migrations to North America click here:

“Salvator Mundi” sold for a record-breaking $450 million in 2017, but is it really as valuable as people were led to believe?
Up Next
Culture & Religion

The Drug Overdose Epidemic Cuts Thousands of Lives Short by Half

A new study highlights the extent of the drug overdose epidemic in the United States.