Google Chrome’s newest version (dubbed “67” for the version #) is promising to eventually phase out the use of passwords.

Via both the already-ubiquitous fingerprint sensor such as most smart phones use, as well as USB “dongle” keys, and facial recognition. It’s tied to what’s known as WebAuthn. 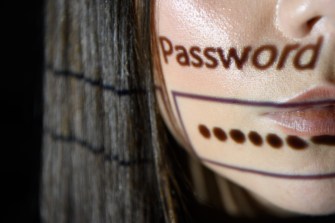 LONDON, ENGLAND – AUGUST 09: In this photo illustration, a password log-in box is projected onto the face of a woman on August 09, 2017 in London, England.  (Photo by Leon Neal/Getty Images)

(Related: If you use a fingerprint sensor to unlock your phone, you can legally be compelled to swipe and unlock your device; not so with actual pin codes/passwords.)

So why are passwords a pain?

—They’re notoriously hard to remember, so people often scribble them down on sticky notes and put them right up on the computer screen. Security, indeed! To get around that, some folks have successfully deployed an all-in-one password keeper such as LastPasss.

—Some companies and sites (Hi, Apple!) will not allow you to change your password to one that’s been used in the last year … which inevitably leads to forgetting the new one. Rinse, repeat.

—They’re extremely insecure when folks don’t get very creative in their use. (Q: What are the most popular passwords? A: “password,” “123456,” and “qwerty.”)

—At the same time, as hackers become smarter, some sites and apps require at least one upper-case letter, one number, one symbol, a minimum of 8 characters … you can see where this is going. Yep; Click HERE to wait for an email that will allow you to change your password!

In addition to the possible end of actual passwords, there are a number of improvements that come with Chrome 67, including better handling of Virtual Reality apps, 34 security bug fixes, and better capabilities to handle CPU attacks from web pages.

And here’s security expert Kathleen Fisher with some concepts on how programmers are staying ahead of hackers:

Related
13.8
The weirdness of quantum mechanics forces scientists to confront philosophy
Though quantum mechanics is an incredibly successful theory, nobody knows what it means. Scientists now must confront its philosophical implications.
Neuropsych
Why is a Starbucks loyalty rewards program making customers so angry?
The rewards price to get a free cup of hot coffee at Starbucks is going up.
Empowering growth
7 essential management training topics for every team leader
From emotional intelligence to problem solving, these management training topics will set team leaders up for success.
Thinking
What if you could rewire your brain to conquer suffering? Buddhism says you can
For Buddhists, the “Four Noble Truths” offer a path to lasting happiness.
Hard Science
Solved: 500-year-old mystery about bubbles that puzzled Leonardo da Vinci
The solution involves the infamous Navier-Stokes equations, which are so difficult, there is a $1-million prize for solving them.
Up Next
Top 5 Advantages of On-Demand Video Training
Professional learning programs are important to any business or organization because they help to enhance your existing workforce by instilling new knowledge and skills. When it comes to creating learning […]