Germany is becoming the first country in the world to start operating a fleet of hydrogen-powered passenger trains that emit only steam and water. It has ordered 14 trains developed from the French company Alstom and after an approval procedure will put them to use on the Buxtehude–Bremervörde–Bremerhaven–Cuxhaven route in December 2017.

The Coradia iLint is the first train to be produced in large quantities, travel long distances (600-800 km on a tankful), and be powered by a hydrogen fuel-cell. An additional perk is it being almost noise-free.

The fuel cell is supplied with hydrogen, which combined with ambient air produces the electric energy needed to power the train. Flexible energy storage is provided by Lithium-ion batteries that accumulate the energy and supply it when needed with the help of an intelligent energy management system. 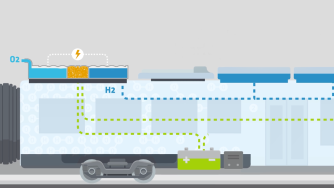 Alstom promises to provide the necessary hydrogen supply infrastructure on the routes, making it easy for further investments in hydrogen trains. Moreover, the company acquires the hydrogen from chemical plants in which the element is produced as a waste product. This makes the trains truly emission-free: from the generation of electricity to the operation.

Netherlands, Denmark and Norway have also expressed interest in the trains.

Related
Life
Scientists use CRISPR to insert an alligator gene into a catfish
Disease kills off 40% of farmed catfish. This gene protects them.
Neuropsych
How you breathe affects your brain
Your breathing rhythm influences a wide range of behaviors, cognition, and emotion.
Health
What happens when regular porn watchers abstain for a week?
Researchers watched for signs of withdrawal — but didn’t find any.
Neuropsych
Daily caffeine intake temporarily alters your brain structure
Compared to people who took a placebo, the brains of those who took caffeine pills had a temporarily smaller gray matter volume.
Thinking
Why you should laugh at yourself, according to Seneca and Nietzsche
“It is more human to laugh at life than to lament it.”
Up Next
Strange Maps
Secret Map Shows Brits Considered Giving Lower Canada to U.S. in 1783
The secret Red Line Map that could have given Lower Canada to the U.S.