The so-called Red Line Map was so controversial that the British government kept it under lock and key for over a century. And with good reason: kept from American eyes during the Paris peace negotiations of 1783, it shows how much more territory the Brits considered giving to the newly-independent United States. As the northernmost line on this map suggests, the whole of Lower Canada might have gone to the U.S. But the Americans didn’t get to see the Red Line Map until 1896.

Negotiating new borders on another continent without accurate maps was tricky business, as proven by the boundary disputes that arose after the Treaty of Paris [1]. But at least both sides used copies of the same map: John Mitchell’s authoritative map of North America, first published in 1755. Because of its use during the negotiations, and its continued relevance for border disputes well into the 20th century [2], it has been called the most consequential map in North American history. 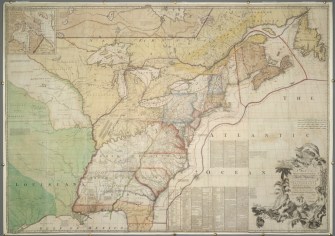 Mitchell (1711–’68), from a family of wealthy Virginia tobacco planters, trained as a physician and studied botany; unlikely antecedents for someone who would go on to produce such an important map. The crucial career change came when Mitchell, at that time working in London as a horticultural consultant, was commissioned by the Earl of Halifax to produce a map of North America that would clearly illustrate the French threat to the colonies.

The map was clearly partisan: it exaggerated British territories and claims to the detriment of Spanish, French and Indian ones. For example, French territory was depicted as much smaller than it actually was, notably by showing an enlarged Iroquois nation as subject to Britain. Ironically, Mitchell’s overstatement of British positions in North America would later serve the Americans well during the Paris peace negotiations, giving them more territory to claim. 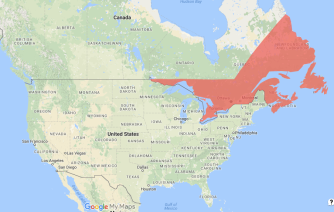 Could have been American: the territory between the northernmost red line and the current border.

During those negotiations, Richard Oswalt, secretary to the British delegation, annotated the British copy of the Mitchell Map with red lines to indicate various interpretations of the boundary between the U.S. and the remainder of British North America. That single copy of the Mitchell Map – which was not disclosed to the American delegation – was later known as the Red Line Map. On that map, the northernmost red line extends the straight-line border, at the 49th parallel, further east from Lake of the Woods, where it currently ends. At a point in the middle of present-day Quebec, that line bends northeast in another straight line towards a point on the northern coast of Labrador.

The territory between that line and the current U.S.-Canadian border comprises large parts of the provinces of Ontario and Quebec, almost all of Newfoundland and Labrador, and the entirety of the provinces of Prince Edward Island, New Brunswick and Nova Scotia. All other things being equal, those extra 600,000 square miles would make the U.S. and Canada trade places in the largest-country rankings: the U.S. would take second place after Russia, Canada would drop to fourth place, after China. Also, most of Canada’s 36 million inhabitants would be citizens of the U.S. instead of subjects of the Queen. 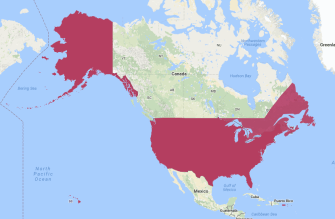 What a greater U.S. could have looked like, if the American delegates had gotten wind of the British map – and assuming the rest of history would have produced the same borders as in ‘our‘ universe.

But that is not how the dice rolled at Paris. Three border configurations were proposed; the last one, by Oswalt, was accepted by both sides in November 1782 and was written into the final Treaty of September 3rd, 1783. That Treaty was less favourable to the American side than Oswalt’s map suggested; a lot of territory south of Oswalt’s red line ended up in Canada.

After conclusion of the Treaty, Oswalt gave his Red-Line Map to King George III. Eventually, it came to in the possession of in the British Library, where it is also known as the ‘King George Map’ – under strict instructions forbidding unauthorised access and publication.

[1] Cartographic ambiguities led to a number of border disputes, notably concerning Maine (see #106) and Lake of the Woods (see #506).

[2] The map’s historical significance as a treaty instrument continued to imbue it with authority; it was used to resolve border disputes between the U.S. and Canada as recently as the 1980s – in the latest case, a dispute over fisheries in the Gulf of Maine.

15 of the most powerful women in history