When last we heard from him, experimental philosopher Jonathon Keats was building a celestial observatory for cyanobacteria. From their petri dishes, billions of these microorganisms would study images from the Hubble telescope, coming to conclusions unavailable to our more highly developed brains. Months later, they’re still at it, and we can barely begin to imagine what they are thinking.

Turning his attention to more pressing, earthly concerns, Keats has launched a new project which will turn the instability of global currency to our advantage. In Rockefeller plaza and Hong Kong, Keats is opening data-processing centers powered entirely by pennies and other small coins.

“You can think of it as electro-chemical arbitrage,” says Mr. Keats. “And it works equally well in bull and bear markets. With our current setup, using several dozen cells filled with saltwater from the Pacific Ocean, we’ve generated as much as 18.7 volts.”

That’s enough electricity to power all three computational units of the data processing center, on a total budget of under three dollars. Each unit is capable of performing a range of mathematical operations, such as addition, subtraction, multiplication and division. Output is nearly instantaneous, though results are currently limited to eight digits. 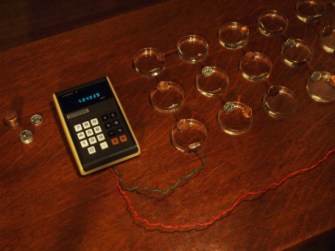 But How Does it Work?

“Money is inherently unstable,” says Keats, chief architect of the pioneering enterprise. “Currency traders have learned to play the market for their own financial gain. At Rockefeller Plaza, we’re looking at currency fluctuation as more than a mere abstraction. We’re actually putting money to work.”

The monetary instabilities exploited by Mr. Keats are metallic. Fen are made of aluminum and pennies are clad in copper, a combination of metals susceptible to galvanic corrosion when the coins are submerged together in seawater. As the coins exchange ions, the chemical reaction produces electric current which can be tapped and run through a circuit.

The value of arithmetic is almost self-evident. But this project has far-ranging political and macroeconomic implications. As China emerges as an economic superpower, tensions with the West over trade practices will inevitably increase. Keats’ project is a sweeping gesture of economic cooperation between China and the West, with Chinese and United States currencies literally co-mingling in an electrochemical bath.

Mr. Keats has begun negotiating data processing contracts. “We already have one order,” he says. “Tolson Capital Management in San Francisco has requested the sum of 5 + 17. That will be the first computation we make when we open for business on April 12th.”

According to Tolson Capital Management principal Jon Tolson, the service has potential. “It beats using a slide rule,” he says. “Of course I can’t offer an official endorsement until my job has been processed.”

The data processing center opens for business at Engineer’s Office Gallery in New York City on April 12, 2012 at 1:00 pm. The gallery is located in the basement hallway of 20 Rockefeller Plaza. Direct access is available during weekday business hours through the turnstiles at the 47-50 Rockefeller subway station. More information:www.engineersofficegallery.com

How to Build Self Control in a Preschooler