The concept of regrowing limbs has always puzzled, yet fascinated scientists. When the axolotl (Ambystoma mexicanum or Mexican Axolotl), an endangered salamander that was discovered in Mexico’s Lake Xochimilco and Lake Chalco began to be studied, scientists were fascinated by its ability to regenerate limbs, nerves, retinal tissue, and even a broken spine.

Way back in the evolutionary chain, we shared a common ancestor with this creature. However, humans took a different track, and if we lose a limb, scar tissue is what remains. The axolotl has the ability to regenerate a lost limb within weeks, rather than it simply sealing off as a scar. (Perhaps related: Axolotls can often be cannibals. I’ll leave the next mental image in that thought process to you…)

Now, scientists have unlocked the genome for it, the largest ever to be sequenced.

What does that mean, exactly?

Scientists can study the newly unlocked genome and get some clues as to how this beautiful salamander does that whole regeneration thing. They’ve already identified the cells that initiate regeneration and isolated the molecular pathways that control how it’s done. Unlocking the genome means they can begin to understand gene regulation and evolution, which is pretty much the final piece of the puzzle.

That means future wounded soldiers, accident victims, cancer patients, and others who lose a limb might just be able to regenerate a new one. Presto!

Sergej Nowoshilow, co-first author of the study, says, “We now have the map in our hands to investigate how complicated structures such as legs can be re-grown. This is a turning point for the community of scientists working with axolotl, a real milestone in a research adventure that started more than 150 years ago.”

The researchers have made the sequence of the axolotl genome publicly available for all scientists and curious minds worldwide.

Of course, some of the science behind 3-D printing robotic limbs is still progressing as well, so it might even be the case that people will have choices of which way to go.

And that should make a lot of folks very happy. 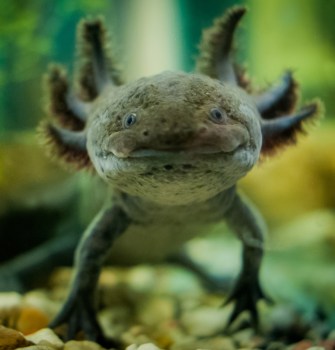 Image Creative Commons licensed.
Related
13.8
The weirdness of quantum mechanics forces scientists to confront philosophy
Though quantum mechanics is an incredibly successful theory, nobody knows what it means. Scientists now must confront its philosophical implications.
Neuropsych
Why is a Starbucks loyalty rewards program making customers so angry?
The rewards price to get a free cup of hot coffee at Starbucks is going up.
Empowering growth
7 essential management training topics for every team leader
From emotional intelligence to problem solving, these management training topics will set team leaders up for success.
Thinking
What if you could rewire your brain to conquer suffering? Buddhism says you can
For Buddhists, the “Four Noble Truths” offer a path to lasting happiness.
Hard Science
Solved: 500-year-old mystery about bubbles that puzzled Leonardo da Vinci
The solution involves the infamous Navier-Stokes equations, which are so difficult, there is a $1-million prize for solving them.
Up Next
Politics & Current Affairs
France will close all its coal power stations by 2021
French president Emmanuel Macron recently announced plans to close all of the country’s coal-fired power plants two years ahead of schedule.