It’s called the “corpse flower” for a reason: It smells like one when it’s in bloom. Actually, that name is an improvement over its scientific moniker, Amorphophallus titanium, which in Latin means “giant misshapen penis.” So “corpse flower” it is. (Its common name is titan arum.) Anyway, since the corpse flower only blooms once about every six years, botanists are baffled by something odd: At least seven of them have bloomed in the U.S. alone this year.

According to Atlas Obscura, the Western Sumatran plant was first cultivated at Britain’s Royal Botanic Garden, Kew in 1889. Up until 2008, there have only been 157 blooms recorded, so the uptick is mysterious. It could be that the plants are related, and thus in sync. There could be two plausible explanations for this. First, there was a widespread distribution of corpse-flower seeds between 2002 and 2008 when botanical gardens caught wind of the public’s fascination with the weird fauna. It could also be that a corpse-flower family is simply growing since there are just more of them now, and pollination is more likely.

The rarity of its bloom is actually one of the things that drew the public’s awareness to titan arum, since each bloom is a genuine botanical event. That and its nauseating odor and preposterous size, of course. 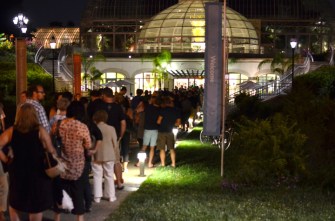 Waiting to catch a glimpse. And a whiff. (DAVID BENNETT)

That stink has been the recipient of some choice—pungent?—descriptors, “1,000 pukes” and “Limburger cheese” among them. It probably smells most like rotting flesh, though (with a base note of dead fish), and botanists think that it’s this particular stank that allows the plant to attract flies and other carrion-loving bugs to its flowers for pollination.

If a nearly unbearable stench doesn’t attract you to the nearest titan arum, maybe its massiveinflorescence — which can reach nearly 10 feet in height — will. 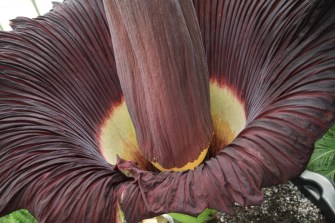 The shape of the corpse flower’s flower is, well, like a giant misshapen…you know. There’s a upturned-bell-like structure called a “spathe” which, says the Royal Botanic Garden, is “green speckled with cream on the outside, and rich crimson on the inside.” Its sides are ribbed and it has a frilly edge. Rising from the spathe is a flower-bearing spike, or “spadix,” at the bottom of which are a ring of large pink flowers topped with a cream-colored flowers. The inflorescence grows from a hidden tube that can weigh as much as 154 pounds.

Even post-bloom the corpse flower is a thing to behold, since its flower is replaced by a single leaf that can be nearly 23 feet tall and across.

For now, though, we’re left with the Mystery of the Multiple Blooms. Hopefully one of the theories above is correct and we’re not facing a noxious threat from this putrid species. Think Little Shop of Horrors III, and hide.

From boosting empathy to improving therapy, virtual reality is poised to change our ideas of the self.
Up Next
Strange Maps

Like most data produced on social media, online bigotry is geotagged. Meaning that hate speech can be mapped. That is exactly what this newest map has done.