Social media? Only ‘civil media’ would be a bigger misnomer. Twitter, Facebook and their ilk provide the safety and anonymity that for some seems license enough to spout hatred and bigotry online. They do it in terms they would not dare repeat out loud to their grandmother. Or at least we hope so; we don’t know their grandmother.

Like most data produced on social media, online bigotry is geotagged. Meaning that hate speech can be mapped. That is exactly what Abodo did. The U.S.-based residential search engine analysed 12 million tweets produced between June 2014 and December 2015.

The result: maps of the hot spots for online hate speech and bigotry in the U.S. If you are looking for a new place to live, as visitors to the Abodo website are likely to be, these maps allow you to steer clear of the localities least compatible with your lifestyle, attitude or ethnicity – or, inversely, give you a good idea where you are most likely to find a new neighbor who shares your preferred form of bigotry.

Both motivations, though opposite, further the same effect: the self-segregation of the States that in future will be known as formerly United. Here’s a taste of what’s to come.

The most derogatory language overall (i.e. before breaking it down into racist, sexist and other categories of bigoted language) was spouted in Louisiana, where 1 in every 87 tweets contained a slur of some sort. The complete Top 10 of states with the highest share of derogatory tweets (per 100,000): 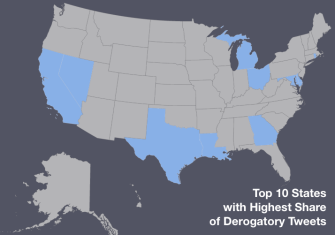 The most uncivil states are a varied bunch, geographically speaking. Most are grouped two-by-two: California and Nevada out west, Texas and Louisiana down south, Michigan and Ohio in the Midwest, and Maryland and Delaware on the Mid-Atlantic coast. Only Rhode Island and Georgia have to make do without a bigot buddy.

If you value civil discourse, forget Louisiana, move to Wyoming. Not just one of the least populous states, also the most courteous – at least, if we take slurs-per-100,000-tweets as our yardstick. The inverse Top 10, of states where the least slurs are tweeted: 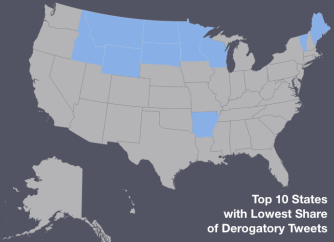 Wyomingers tweet ten times fewer derogatory terms than Louisianians. The most civil states form a much more homogenous block, with seven involved in a group hug, and two more perched on the Canadian border further east. Arkansas is the only southern state in this list. 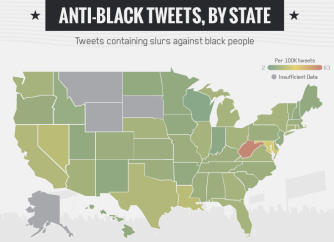 The good news: racial slurs against black people are relatively few and far between in the twittersphere – numbering no more than a few hundred for the examined period.  The  bad news: there definitely are geographic pockets of anti-black tweets. West Virginia leads the pack, with 83 slurs per 100,000 tweets. It is followed by Maryland (36.5) and Louisiana (31.3). Idaho scores best/last with 2.4, followed by Maine with 2.7. 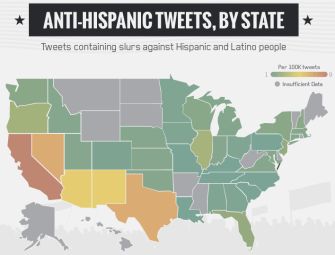 Explicitly anti-Hispanic tweets are similarly rare. They are most prevalent in the states with the largest Hispanic population: California (8.7), followed by Texas, Nevada, Arizona and New Mexico. Correspondingly, states with low Hispanic populations – Maine, Montana, and West Virginia – have some of the lowest for prevalence of anti-Hispanic language in tweets. “Because anti-Hispanic slurs have largely not been reclaimed by Hispanic and Latino people in the way that the N-word is commonly used in black communities, it’s more likely that the usage of these anti-Hispanic slurs reflects actual racial hostility”, Abodo postulates. 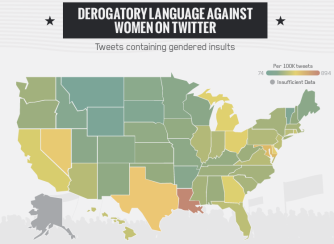 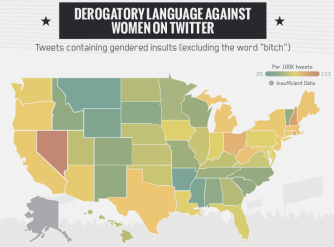 However, the national picture shifts dramatically when the word ‘bitch’ – frequently used in a non-sexist, though often still derogatory context – is excluded. Nevada (133) now leads the nation in tweeted sexism of the no-bitch variety – possibly due to the relative importance of the local adult film industry. Other states ranking high here are New Hampshire (121), Rhode Island (115), and Ohio (114). 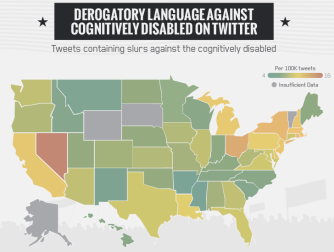 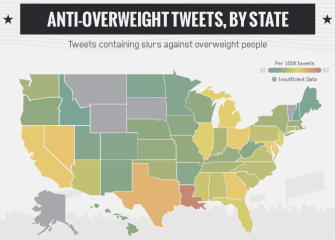 For more analysis, plus city-level data, check out the original post, here at Abodo.

Could dark energy be caused by a reaction to what’s in the Universe?

The full UV-visible-IR composite of the XDF; the greatest image ever released of the distant Universe. Every galaxy shown here will eventually accelerate away from us at greater than the […]