Regular Big Think readers are familiar with experts’ assertion that what we know of the world is our own construction built from our sensory inputs. It may or may not represent any kind of objective “reality” since there’s likely to be plenty of things we’re incapable of perceiving. At that, much of what we do pick up is received by us indirectly, as Alva Noë points out. When we see something as green, what we’re really seeing is the green portion of the color spectrum that the object doesn’t absorb. Does that mean it’s not really green, but “anti-green?” (A rabbit hole awaits anyone trying to work that out.) And what about an object that doesn’t reflect any light at all — what would that look like to us, who depend on reflected light to see? Well, have a look. 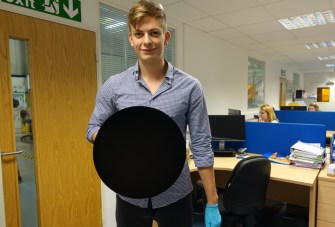 No, that’s not a black circle Photoshopped over an image. It’s a fail for your brain. That portal to nowhere is a sphere painted with Vantablack, a high-tech coating patented in 2014. It’s blacker than black. Our brains just can’t handle it. Vantablack sucks up so much of the light spectrum — 99.965% percent of ultraviolet, visible, and infrared light — that to the human eye anything coated with it looks like a void.

Surrey NanoSystems, the company that developed it, made Vantablack even blacker in 2016. They say that spectrometers can’t even detect the minuscule amount of light it allows to escape.

Does this look like the laser beam is going under it? Nope. The laser’s light is just not being reflected at all when it encounters the light-absorbing coating.

Vantablack is typically about 20 to 30 microns thick when it’s applied. The coating contains what Surrey NanoSystems calls a “forest” of aligned and equally spaced carbon nanotubes. But the nanotubes make up only about 0.05% of the coating — the rest is free space. When light hits the coating, it enters the space between the reflective nanotubes and bounces around between them until it’s absorbed and turned into heat. The heat is conducted into the coating’s substrate where is dissipates. 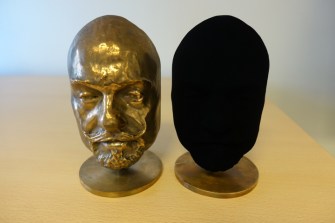 Two statues: One metallic, and the other…where is the other? (SURREY NANOSYSTEMS)

Here it is on aluminum foil.

Its creators sees a range of applications for this freaky stuff. Exceptional stray-light suppression capabilities could help keep down light “noise” in sensors, normal and infrared imaging devices, telescopes, spectrometers, cameras, movies projection systems, and various types of calibration devices. It can also be used aesthetically when black is just not enough — it’s nothingness the artist seeks. The company envisions things such as totally invisible fixtures that seemingly produce light from nowhere, and what look like spaces in architecture or design objects.

Expressing gratitude encourages others to continue being generous, promoting a cycle of goodness.
Up Next
Personal Growth

12 Reasons We Should All Be More Impractical in Life

Seemingly impractical things include pleasure reading, an overactive imagination, and the liberal arts. Each is commonly derided by all too practical people. Each is vital to us all.