A survey of more than 1,500 teenagers from various parts of the U.S., conducted by AmGen Foundation and Change the Equation, showed that teens are in fact interested in science, just not necessarily their science classes. Take biology, for instance. Over 70 percent of students declared that they were interested in the subject of biology, but just 33 percent said that they actually enjoyed their biology class itself. That’s in comparison to 48 percent of teens who like their non-science coursework.

The Partnership for a New American Economy predicts that by 2018 the U.S. will have a shortfall of 230,000 “qualified advanced-degree STEM workers.” (That’s short for science, technology, engineering, and mathematics.) And they argue that not enough young people going into STEM fields is part of the problem. A 2013 survey showed a 15 percent decline from the year before in terms of the number of teenagers who said that STEM and medical-related fields are their top career choice. What could possibly be causing a decline in interest while the need for STEM workers stays so high?

Well, it looks as though there is a pretty big mismatch between the activities that teens find most interesting when it comes to science and the way teaching happens in the classroom. Teens want to do hands-on experiments and take field trips to learn more about how the world works, but the most common teaching activities for science are class discussion and teaching straight out of the textbook. Those in charge of the survey recommend moving toward “inquiry-based STEM curricula,” better training for teachers, and closer ties between schools and local science businesses. 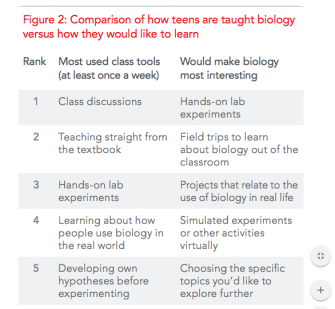 Some argue that another reason kids are shying away from science fields is STEM’s reputation. Science has long been seen as a profession dominated by white males and also as something removed from what “ordinary” people do. These factors can combine to make kids feel that science is simply too hard or boring to pursue compared to other careers.

Even though science can seem scary at first, professionals argue that it’s an important “language” to know. Parents, the government, and public figure scientists could all potentially have an impact in drawing people into STEM careers.

Three out of four Russians accused of witchcraft were men.
Up Next
Politics & Current Affairs

The Worst Mass Shooting in U.S. History Was Not in Orlando

As horrific as the Orlando Massacre was, we must not forget the Wounded Knee Massacre, the single worst mass shooting in U.S. history.