Why do Vermeer’s paintings fascinate us so? Perhaps the reason lies behind a revolution in seeing in both art and science rooted in Vermeer’s 17th century Holland. During the heyday of tiny Holland’s position as a world power, in the city of Delft resided two remarkable men — the painter Johannes Vermeer and the scientist Antoni van Leeuwenhoek. While Vermeer painted images that changed forever how people see the world with their own eyes, Leeuwenhoek peered through microscopes to discover worlds only visible through technology. In Eye of the Beholder: Johannes Vermeer, Antoni van Leeuwenhoek, and the Revolution in Seeing, historian-philosopher Laura J. Snyder connects these two pioneers — born days apart, living close by all their lives, reunited in Vermeer’s death — to demonstrate how both modern art and modern science were born in that tiny city of Delft. 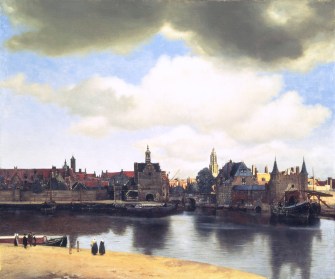 Like anyone who writes about Vermeer, Snyder contends with the lack of biographical information about the artist. Linking Vermeer to a specific person, such as Leeuwenhoek, without specific evidence — the “smoking gun,” as Snyder puts it — seems impossible. However, Snyder argues that, “What we do know of the two men is intriguing enough without engaging in conjecture, no matter how agreeable it is to imagine them discussing optics and optical instruments over a beer in Vermeer’s family’s tavern.” As much as we want to imagine them buddies in small-town Delft (shown in Vermeer’s 1660-1661 View of Delft above), Snyder sticks to the known facts: The two were both born in 1632; their names appear seven lines apart in the baptism record of the same church; they lived near one another for years; and Leeuwenhoek served as trustee of Vermeer’s estate after his sudden death in 1675. Leeuwenhoek, also a public official at the time, may have accepted the challenge of righting Vermeer’s finances as a civic duty, but the fact that he helped pay some of the debts with his own money suggests a closer relationship. Nevertheless, at the very least, Vermeer and Leeuwenhoek shared in common that historical moment in Holland when technology opened whole new worlds of vision. 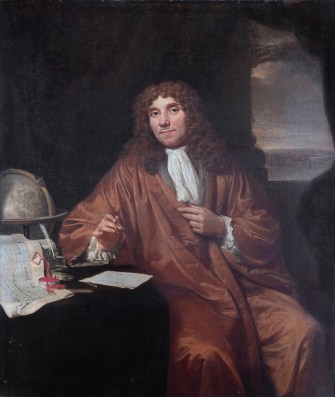 The main person behind that historical moment fascinated with optics and seeing was Galileo Galilei, who improved telescopes in the early 17th century enough to view the topography of Earth’s moon; observe the moons of Jupiter; and track the movements of Venus, Saturn, and Neptune enough to convince himself (if not the Catholic Church) that Nicolaus Copernicus’ heliocentric model of the solar system was correct. The universe visible to the naked eye suddenly revealed itself even further through technology. When Galileo and others essentially inverted the telescope into a microscope, however, the microscopic worlds invisible to the naked eye came into view — an even more shocking development. “Others before had magnified the visible and seen previously unseen parts of tiny organisms and artifacts around us,” Snyder writes. “But Leeuwenhoek had begun to surpass what others had done: He was going deeper, and seeing more, than anyone else had seen.” With unsurpassed dedication, amazing persistence, and his own technical innovations, Leeuwenhoek (shown above in a portrait by Jan Verkolje) saw (and documented) blood capillaries, muscle fibers, spermatozoa, and even bacteria before anyone else. After Leeuwenhoek, disease and even reproduction lost their mysteries and came out of the dark ages. Embodying Francis Bacon’s scientific method of strict observation like few others had before, Leeuwenhoek set the standard that today’s science and medicine — focused through technology by everything from MRI machines to the Hubble Space Telescope — continues to follow. 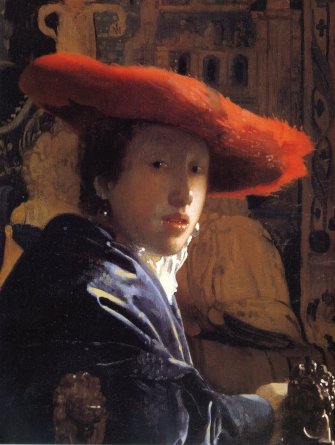 But how does Vermeer fit into this world of revolutionary seeing? Snyder argues (as others also have) that Vermeer used a camera obscura to achieve his new way of seeing. The camera obscura, a device known in one form or another since the 5th century BCE, concentrates colors to a chromatic intensity by narrowing the range of brightness, thus allowing the viewer to see colors even in shadows, while transforming a three-dimensional image into two dimensions, thus allowing the viewer to better perceive perspective. Vermeer’s penchant for dazzlingly intense color and fascinating, perspective-driven depth come from his use of the camera obscura, Snyder argues. Yet, Vermeer didn’t just copy from the camera obscura. He added the painter’s touch to accentuate certain effects (and compensate for the distorting effects of the lenses available at the time), such as the brilliant highlights on the lips of The Girl With Red Hat (1665-1666; shown above). Vermeer’s Dutch audience most likely knew what the world looked like through a camera obscura, so he painted to those expectations and taste. More importantly, Snyder adds, “What Vermeer was painting was the way the eye actually sees, not the way the mind thinks it sees.” The mind thinks shadows are black and that lines shouldn’t somehow meet off in the distance, but as Claude Monet and the Impressionists (the starting point of modern art) have conditioned us to see and perspective has taught us, haystacks with purplish shadows and vanishing points do exist. Vermeer’s revolution in seeing is subtler to us today mainly because, like Leeuwenhoek’s bacterial world, we now accept them as undeniably true. 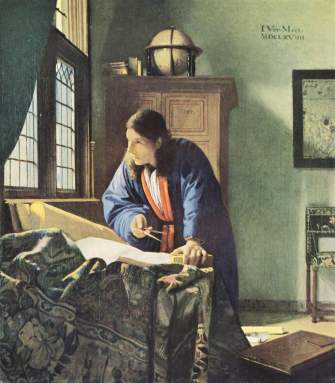 Toward the end of his life, Vermeer’s choice in subject moved away from young women with pearl earrings and red hats to older men consumed with issues of seeing. In 1668 and 1669, Vermeer painted two companion pieces featuring the same male model, The Astronomer(image at top of post) and The Geographer (image above this paragraph). Could these be portraits of Leeuwenhoek, who also dabbled in astronomy and just recently earned a surveyor’s license? (Compare these men with Verkolje’s portrait shown above of Leeuwenhoek as a much older man and see if you can make a connection, as Snyder and others do.) Are these the “smoking gun” that connects the two visionaries of Delft? But even if they never knew each other, Vermeer and Leeuwenhoek changed the seen world forever by making possible, as Snyder writes, “the rampant realization that the world is not — or not only — as it seems to be.” In that uncertainty lies the impetus both of modern science and modern art. Laura J. Snyder’s Eye of the Beholder: Johannes Vermeer, Antoni van Leeuwenhoek, and the Revolution in Seeing reminds us not only of the revolutions in seeing of the past, but also of the curiosity and willing suspension of disbelief necessary for the revolutions in seeing to come.

Related
Starts With A Bang
Ask Ethan: What are white holes, and do they really exist?
In General Relativity, white holes are just as mathematically plausible as black holes. Black holes are real; what about white holes?
Life
Strange life forms create an “alien” ecosystem in an abandoned uranium mine
Slimy biofilms made up of bacterial and eukaryotic life forms have taken over an abandoned, flooded uranium mine in Germany.
Hard Science
Earth has an eerie “sodium glow,” and astronomers use it to image stars
Air currents in our atmosphere limit the resolving power of giant telescopes, but computers and artificial stars can sharpen the blur.
Health
How saliva changes the flavor of food
“It’s a liquid, but it’s not just a liquid.”
High Culture
Why are flood myths so common in stories from ancient cultures around the world?
Could the prevalence of flood myths around the world tell us something about early human migration or even the way our brains work?
Up Next
Surprising Science
The psychedelic origins of yoga
While we usually associate yoga with flexibility-inspired exercise, evidence shows a lack of psychedelic mushroom tea could lie at the foundation of this discipline.