Earth’s orbit around the sun is almost a perfectly circular one. That is, except every 405,000 years, when the gravitational pull of massive Jupiter and Venus yanks the earth’s orbit into an ellipse of about 5°, producing the Milankovitch cycles that cause the planet’s glacial and interglacial cycles. “Scientists can now link changes in the climate, environment, dinosaurs, mammals, and fossils around the world to this 405,000-year cycle in a very precise way,” says geomagnetic researcher Dennis V. Kent of Rutgers University, who has now documented this periodic warping of our orbit. 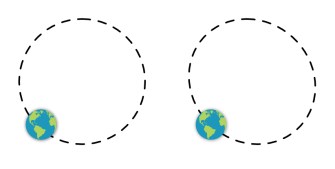 It’s only 5°, but it’s enough to matter. (Image: LuckyVectorShutterstock/Big Think)

Say what? Jupiter and Venus cause climate change?

Before anyone starts jumping up and down shouting, “Yay, climate change isn’t our fault,” bear in mind that the temperature cycles for which Jupiter and Venus may be responsible occur over a very long time, extending before we got here and continuing after. The orbital reshaping is “pretty far down on the list of so many other things that can affect climate on times scales that matter to us,” says Kent.

How the cycles were discovered

Kent and his colleagues discovered the pattern while digging in Arizona’s Petrified Forest National Park for evidence of magnetic-polarity reversals in Earth’s past. One core, in particular, taken from the Chinle Formation, was 1,700 feet long, reaching down and back to the Triassic era from 202 to 253 million years ago. 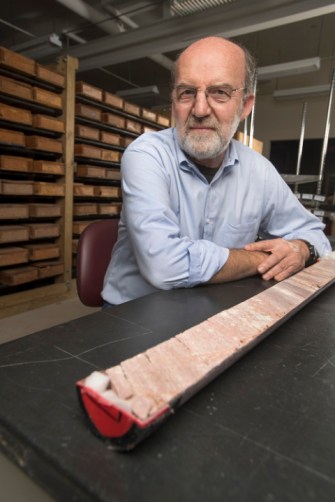 When they compared the 2.5-inch-diameter core to others extracted from New Jersey’s Newark Basin, they found a number of patterns that aligned to Earth’s orbits of the sun, but one demanded their attention: it occurred every 405,000 years. “There are other, shorter, orbital cycles, but when you look into the past, it’s very difficult to know which one you’re dealing with at any one time, because they change over time,” Kent explains, but the “beauty of this one is that it stands alone. It doesn’t change. All the other ones move over it.”

Why it affects our weather

Explaining the climate ramifications of his discovery, Kent says, “The climate cycles are directly related to how Earth orbits the sun and slight variations in sunlight reaching Earth lead to climate and ecological changes.” It may be just a 5° misshaping, but it’s enough to make its impact felt and to leave a signature behind. And it’s amazing that celestial bodies so far away—Jupiter is 588 million kilometers from Earth, and Venus is 261 million—can nonetheless impact our climate.

Related
13.8
What kind of intelligence is artificial intelligence?
The initial goal of AI was to create machines that think like humans. But that is not what happened at all.
The Present
What’s effective altruism? A philosopher explains
Some effective altruists “earn to give” — they make as much money as they can and then donate most of it to charities.
Sponsored
How to avoid family fights about money
No family is immune to money conflicts, no matter how much they love each other. Here’s what to look out for.
L&D strategy
Best practices for a needs analysis [Templates included]
Conducting a thorough needs analysis requires care, curiosity, and open-mindedness.
Neuropsych
Memory and the benefits of forgetting
Forgetfulness isn’t always a “glitch” in our memories; it can be a tool to help us make sense of the present and plan for the future.
Up Next
Starts With A Bang
How Do The Most Massive Stars Die: Supernova, Hypernova, Or Direct Collapse?
We’re taught that the most massive stars in the Universe all die in supernovae. We were taught wrong.Create a star that’s massive enough, and it won’t go out with a whimper […]