A 2015 study by Craig Silverman at the Tow Center for Digital Journalism explored the reasons for the success of viral misinformation online (backstory). The researchers created a database that can be explored at www.emergent.info, which collects rumours that appear in the press. Between August and December 2014, the researchers collected 1,500 articles, which described 113 rumours. The rumours were collected by monitoring Twitter, RSS feeds, and using Google Alerts to monitor search terms such as “unverified,” “unconfirmed,” and “rumour.”

Claims were coded based on whether the headline and/or the body of the text supported or debunked the claim or merely reported that the claim exists. The researchers then examined whether the claims could be verified as true or false.

The researchers found that once a claim was published by one outlet, the claims were rapidly repeated, or “pointed” to by other publishers without any attempt to add any additional reporting or verification. An example of such a false story was the claim that a commercial aircraft went missing from Tripoli airport, a story that appeared on a website called The Washington Free Beacon. From this one story, we can see a number of other publications repeated the claim as true, while a similar number simply repeated the claim. Only the rumour-tracking website Snopes.com bothered to actually check the claim and consequently discovered that the claim was false.

This problem is compounded by the fact that only rarely did news agencies follow up to see if rumours they had reported turned out to be true, as can be seen by this example of news agencies that reported on a rumour that a mass grave was found in Mexico holding the bodies of missing students: 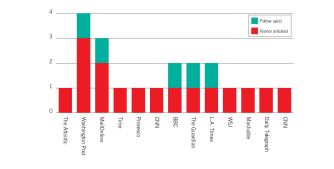 The issue is further exacerbated by the fact that even when news agencies did follow up, the vast majority published the update as a follow-up story, leaving their original incorrect story uncorrected and in circulation. The researchers quote Joshua Benton, editor of the Nieman Journalism Lab, who describes the problem of unverified viral content as:

“journalism as an act of pointing — ‘Look over here; this is interesting.'”

One of the most toxic patterns the researchers discovered was articles with a headline that reports a claim to be true whilst the body of the article simply reports that the rumour exists. Over 70% of the rumours the researchers tracked saw at least one publisher using this formula to report a story. This is so important, the researchers argue, because headlines are often all we see on social media. As the now famous Chartbeat study found, most people who click on an article don’t actually read it, which allows rumours contained in headlines to propagate.

The problem is partly due to the falling margins on journalistic publishing, which make it more difficult for journalists to verify claims, but the problem is also in part a result of our unending appetite for gossip. The researchers found that unverified claims attracted far more interest than corrections, updates, or articles debunking false claims. More successful still were outright false claims, which the researchers write “are engineered to appeal to hopes, fears, wishes, and curiosity. They are not restrained by facts or reality.”

Next time you see a viral story online, remember that just because it has been picked up by a major news outlet does not mean the story has been verified. As Silverman’s study shows, it is now extremely commonplace for major publishers to regurgitate rumors that began life on clearly dubious websites, without any attempt at verification.

None of this is to say that “pointing” alone is necessarily a bad thing. If a journalist has no time, additional knowledge, or insight to add, “pointing” to a reliable source is not an issue. The problem emerges when journalists apply headlines or conjecture that doesn’t accurately reflect content, or misrepresents the information being pointed to; this is particularly troublesome when the publication doesn’t link to their source, so the error is not obvious to more scrupulous readers. This is how rumors are made.

The whole isn’t greater than the sum of its parts; that’s a flaw in our thinking. Non-reductionism requires magic, not merely science.
Up Next
Technology & Innovation