As we discussed in the previous Going Mental posts, some of the most fundamental mechanisms of the human brain remain a mystery to scientists. Consciousness, intelligence, and sleep are so fascinating largely because they require such complicated interactions among disparate brain areas to produce phenomena we take for granted as normal. But even more fascinating is when something goes wrong, when the brain doesn’t function like it should. So this week at Big Think is dedicated to the engrossing—and occasionally lurid—world of abnormal psychology. And to kick things off, we’re beginning with perhaps the most famous case in all of abnormal psych, the case of Phineas Gage.

On September 13, 1848, a young railroad foreman named Phineas P. Gage was setting a charge to clear a path for new train tracks. Normally a hole would be drilled into a rock, the hole would be partially filled with gunpowder, covered in sand, and then triggered using a fuse and a tamping iron. But on this fateful day, Gage mistakenly began tamping directly on the gunpowder before his assistant had a chance to cover it with sand. The resulting explosion propelled the iron rod (3 feet long and 1.25 inches in diameter) right through Gage’s skull, but he miraculously survived and, after some months of convalescence, returned to work.

But as Harvard psychiatry professor John Ratey describes in his neuroscience primer “A User’s Guide to the Brain,” something was different about Gage after the accident: “Gage’s temperament changed so drastically that he lost his job. He had been known as a remarkably responsible and even-tempered individual, but after the accident he was often compared to a wild animal with no moral sense. He cursed in front of women—unheard of in his day—and fought irresponsibly.”

Until the advent of brain scans and magnetic resonance imaging, brain lesions studies like this were the only way scientists could study the functions of individual brain areas in humans. Twenty years after Gage’s accident, physician John Harlow hypothesized that Gage’s drastic behavioral changes were a result of the damage to his frontal lobe. There must be particular structures in the brain

Two other early neurologists, Paul Broca and Carl Wernicke, also used brain lesion cases to predict structures in the brain that controlled certain behaviors. Based on a patient with brain damage who could only produce the single syllable “tan,” Broca hypothesized in 1861 that the left inferior frontal gyrus was involved in

language production. 150 years later, this area is still known as Broca’s area, and patients with localized damage to this area suffer from Broca’s aphasia. Their speech and reading comprehension may be completely intact, but their ability to speak or write is severely damaged. 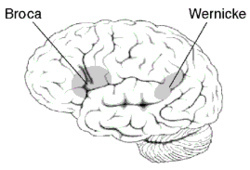 Several years after Broca’s discovery, Wernicke described a language problem distinct from Broca’s. His patient’s problem had nothing to do with speech—he could produce words and could write with no effort—but the words he said or wrote were little more than gibberish. His speech and reading comprehension were highly impaired as well. Based on the patient’s brain damage, Wernicke hypothesized that the left posterior superior temporal gyrus, now known as Wernicke’s area, governed language comprehension.

In 1994, Hanna Damasio and a team of researchers returned to the Phineas Gage case. Using photos of Gage’s skull and new computer technology, they recreated a three-dimensional image of his brain. And the areas most likely to have been damaged by the iron rod were in fact the left anterior prefrontal cortices and the ventromedial prefrontal cortex—areas we now know to be crucial to decision making, thanks to brain-imaging technology.

Aside from being inherently fascinating, abnormal psychology has been crucial to an understanding of how the normal brain works. It is unethical, of course, for scientists to induce injuries in parts of the brain in order to observe resulting behavioral changes.  But when injuries like Phineas Gage’s happened by accident, scientists got their first glimpse into what behaviors were governed by which parts of the brain.

“The Return of Phineas Gage,” (1994) co-published by Hanna Damasio in the journal Science [PDF]

We evolved to be kind – and die for others.
▸
4 min
—
with
Paul Bloom
Up Next
Guest Thinkers

Fan Culture: Time to Get a Life or An Overlooked Opportunity to Educate?

In a now famous skit from Saturday Night Live, William Shatner told a room full of Trekkies to “get a life.” Like Shatner, highbrows tend to dismiss fan culture as […]