Sci-fi fans marvel as the age of bionics will soon be upon us. Through recent breakthroughs in robotics, computing, and neuroscience, researchers at John Hopkins University have recently reported a tremendous feat. They built a prosthetic hand where the amputee can move each finger individually with only his thoughts. Comic book fans, calm down. Whether or not this will lead to a super villain who can control a squadron of attack drones with his mind remains to be seen.

The VA has been providing prostheses to returning veterans since 1866. After World War II, the National Academy of Sciences created the country’s first Artificial Limb Program. Here, wooden prostheses or a wheelchair were a patient’s only options. Today, returned veterans from Iraq and Afghanistan have much more advanced and nuanced prostheses at their disposal. One of the biggest advancements is that this technology can be altered to fit a patient’s body and particular needs. Only in the last two decades have advances in robotics and biotech pushed into a realm once considered science fiction.

When we think of Bluetooth, we often think of those annoying guys who walk around self-importantly taking phone calls through an ear piece, or perhaps the ease of remotely accessing a device, such as our printer. But Bluetooth has made a significant contribution to the prosthetics industry. Amputees who have lost both legs walk better when each is fitted with a Bluetooth device. This helps with the rhythm of walking, cadence, and stride. It also helps to control pressure and speed. 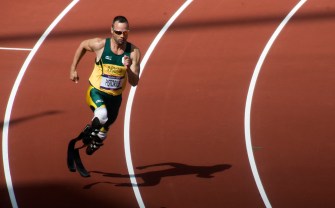 Oscar Pistorius in the 2012 Olympic Games

For those with above-knee amputations, the struggle has been more pronounced. The human knee is complex and so has been particularly tricky for scientists to mimic. Enter the microprocessor. Now computer controlled or “robotic” knees can analyze how much pressure the patient wants to put on the limb and respond accordingly. There is also a fluid control unit which the onboard computer uses to monitor joint resistance, as when one is walking up an incline. The FDA recently approved surgically attaching a prosthetic to the bone, to allow for greater mobility, particularly in cases where the patient has lost a leg above the knee.

A series of specific advancements have led to limbs being able to move with one’s mind. Myoelectric technology is one. The prefix myo means muscle. This is where sensors are placed directly against the skin at the amputation site. Electric signals from the brain interact with sensors attached to a processor, giving the amputee control. Another pivotal advancement is targeted muscle reinnvervation. Nerves in the amputated limb are reinvigorated using those from a different part of the body. When the patient wants to move, they think about it as they normally would. The signals go down to nerves in say the chest. These interact with a microprocessor in the limb, allowing an action to take place. 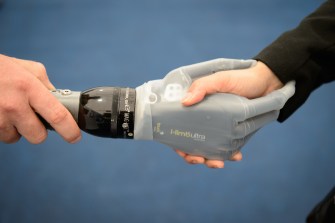 Utilizing these developments, researchers at the Cleveland Veterans Affairs Medical Center (VAMC) in conjunction with those at Case Western Reserve University, rose to the challenge when they encountered the case of Igor Spetic. Spetic, a 48 year-old Ohioan wanted a hand which could destem cherries without crushing the fruit. VAMC researchers and colleagues developed his prosthesis with a myoelectric interface, allowing the sense of touch to occur in 20 different sites on his new hand. This particular prosthetic can allow a patient to operate the hand with 76% accuracy, the team reported. But by using the thumb and pinkie together, the prosthetic can achieve accuracy levels up to 88%.

In September of last year, DARPA reported the case of a 28 year-old man who had been paralyzed for a decade, after suffering a spinal cord injury. He was able to move a robotic, prosthetic hand with his mind through electrodes attached to the sensory cortex of his brain. The wires running from these electrodes to the hand were developed at the Johns Hopkins University Applied Physics Laboratory (APL). Now DARPA and Johns Hopkins researchers have joined forced. They have developed an even more impressive model, what are known as Modular Prosthetic Limbs (MPL). 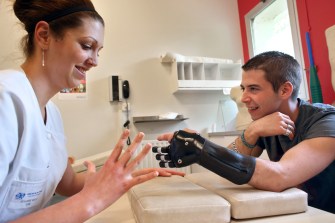 These arms have 100 sensors which allow users to feel sensation. Since its modular, pieces can be taken off or added to suit one’s needs. The FDA must still approve this device. What’s more, it isn’t cheap. The approximate cost, $500,000. Researchers say they designed it to be sophisticated, and as this technology rolls out and becomes commonplace, the price will come down, and more cost-effective models will be developed.

Though in the pipeline, a time when bionic devices will be made available to the paralyzed and amputees is still years ahead. Much more brain mapping and computer programming needs to be done before a workable product becomes a reality. Still, a world where amputees will have limbs that allow them to feel what they are touching, and to have movement and capabilities much like an organic limb, if you will forgive me, is within reach, an accomplishment that could have never been foreseen way back in the aftermath of the Civil War. Now, about controlling a squadron of attack drones with one’s mind. That announcement unfortunately is still forthcoming.

A medical entomologist points to metabolism, body odor, and mindset.
Up Next
Starts With A Bang