It’s taken as a matter of fact by the marijuana-smoking community that weed is getting more potent all the time. While scientists aren’t so sure this is actually the case outside of specially bred, designer strains, nobody in Brooklyn was quite prepared for the mind-melting so-called synthetic “grass” that hit the streets July 12, 2016, leaving 30 people capable of little else than staggering around, moaning, and staring blankly at who-knows-what. The New England Journal of Medicine, which reported the event, caused something of an uproar referring to the blissed-out overdose victims as “zombies,” so we won’t do that here. But you get the idea.

The synthetic drug turned out to contain AMB-FUBINACA, a high-powered synthetic “cannabinoid compound,” reminiscent of something patented by drug giant Pfizer in 2009 but never tested on humans. The cannabinoid compound produces effects similar to the THC (Tetrahydrocannabinol) found in plant-grown pot, but is a different class of chemicals to the cannabinoid found in cannabis, so terms like ‘synthetic pot’ are a misnomer. Scientists from the University California, San Francisco (UCSF) spotted AMB-FUBINACA in a foil-wrapped packet found on one of the Brooklyn walkers and in blood and urine from 8 of the 18 people who wound up hospitalized. The foil packet was labeled “AK-47 24 Karat Gold.” Truth in advertising: The synthetic drug was 85 times more potent than plant-grown marijuana, according to the New York Times. 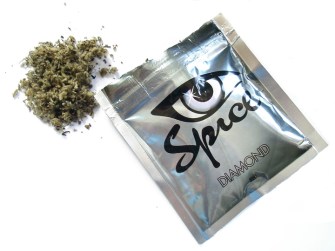 The Brooklyn event foreshadows a looming threat to drug users as K2, Spice, and other concoctions gain in popularity. UCSF clinical chemist Roy Gerona says, “There is this false idea out there that these drugs are safe, because no one overdoses on marijuana.” But that doesn’t apply to so-called synthetic pot, which has a very different chemical makeup than plant-grown weed. According to Slate, “you’re basically getting a chemical—you never know which one—that’s been dressed up in a weed costume.” Another dressed-up drug compound, MDMB-CHMICA, has been linked to 79 serious medical incidents, including 29 deaths, in the EU.

With marijuana now legal and relatively easy to obtain in a majority of states in the US and other countries, why is the sale of synthetic designer drugs like K2 and Spice booming? First off, it’s typically cheaper than the real thing. It’s also frequently very potent as in the Brooklyn event and in such strains as K2, which is popular among the homeless thanks to its low street price. (AMB-FUBINACA is 50 times more potent than K2.). And since “synthetic marijuana” — whose legality is iffy at best — doesn’t actually contain THC, it doesn’t always show up in drug tests.

AMB-FUBINACA likely traveled from Pfizer to Brooklyn via illicit drug labs in China and other places that keep an eye on public patents, like Pfizer’s, to learn about new ways to produce new compounds. Manufacturers sell these, untested, on hidden websites — the dark web — to middlemen who package them with cheap herbal products for sale to smokers. Are they safe? Who knows. And if this isn’t dangerous enough, there’s human error: Gerona thinks it’s probable that one of these middlemen screwed up the dosing in Brooklyn. 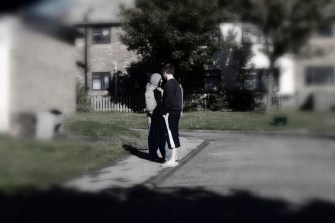 It’s not that the middlemen aren’t well-compensated. Researchers say that AMB-FUBINACA sells for $1,950 to $3,800 a kilogram online. The Brooklyn drug contained 16 milligrams of the stuff — so that single kilogram of AMB-FUBINACA could bring in $500,000 on the street.

The best advice for pot smokers is to stay far away from synthetic marijuana – it’s in no way the same drug. There are plenty of plant-grown strains that can just as successfully rip the roof off one’s cranium without the risk of turning its smoker into a staggering you-know-what.