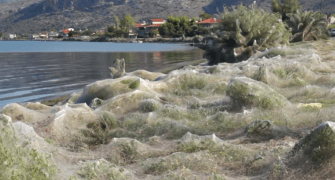 In a phenomenon that can should only be in nightmares and Halloween horror films, stretch spiders have covered the beach of a Western Grecian island lagoon; it’s a phenomenon that happens every so often — the last time it was here was in 2003. It’s because the spiders are having a bit of a feast right now on swarms of mosquitos. After their gorging, the spiders will follow up with mating.

Lest you think the end of the world is nigh, though, rest assured that they will only be doing this for a few days.

“When an animal finds abundant food, high temperatures and sufficient humidity, it has the ideal conditions to be able to make large populations,” explained molecular biologist Maria Chatzaki from Democritus University of Thrace in Greece. “This phenomenon has arisen from a population explosion of this spider.”

Still, those of us with arachnophobia will probably sleep a little less well this evening knowing that these little buggers are out there… somewhere. 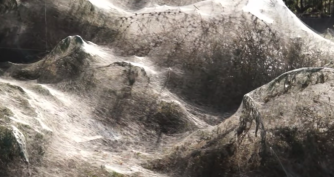 It’s not permanent, and doesn’t harm anything. Aside from… you know, your subconscious mind.

Not to worry about the other living things beneath this all-encompassing web, however.

“These spiders are not dangerous for humans and will not cause any damage to the area’s flora,” Chatzaki told the Newsit.gr website. “The spiders will have their party and will soon die.”

But just because they’re halfway across the world, doesn’t mean it can’t happen in the United States. Spiders turned a quiet roadside in Dallas, Texas, into a web-laden scene. 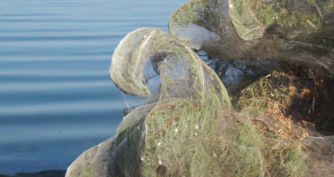 But seriously, though… is there an upside?

There is an upside to this. These spiders are feasting on mosquitos as they create these vast, 1,000-foot webs.

Anything that does that is A-OK in my book.

Long before Alexandria became the center of Egyptian trade, there was Thônis-Heracleion. But then it sank.
The Present

The Economic Glory That Was Greece

What made the Golden Age of Greece, and Western Civilization, possible? One author says “free trade”.
Up Next
The Present

Why are U.S. Supreme Court justices appointed for life?

U.S. Supreme Court justices receive lifetime appointments to the bench, but many wonder if indefinite terms do more harm to our legal system than good.