If you’re fascinated by the diversity of life in Earth’s oceans, you’re probably aware of the aphotic (Greek for “without light”) or “midnight” zone, an underwater region beyond the reach of light. Submersibles diving far deeper than we can have regularly revealed a dazzling array of weird creatures down there, like giant tube worms. You may also know about the mesophotic (“middle light”) layer of the sea, from about 40 meters to 150 meters down, where corals live. There’s been little exploration, though, beyond the lower dark edges of the mesophotic: Corals dependent on light can’t live there, it’s too deep for divers, and submersibles are expensive. It’s as if the sea drops straight down to the aphotic. Now, though, a new report from the Smithsonian describes a region from about 130 meters to 309 meters beneath the surface that’s teeming with unique life. The report proposes calling this layer the “rariphotic” (“scarce light”) region. It’s, yes, the twilight zone. (The researchers also suggest the lighter, shallow region atop the mesophotic be called the “altiphotic” from here on.) 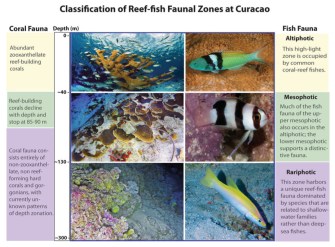 The report comes after a six-year study by a team of three Smithsonian researchers—C.C. Baldwin, L. Tornabene, and D. R. Robertson—of a single area off Curaçao Island in the Caribbean. The team’s manned submersible made 80 dives exploring from 40 to 309 meters underwater. They recorded 4,436 fish and unambiguously identified 71 reef-fish species, including 30 new ones. Their analysis of the data revealed, “strong faunal breaks along the depth gradient that clearly point to the existence of a faunal zone immediately below the mesophotic that extends down to at least 309 m and that is home to a unique reef-fish fauna.”

The distribution of species the researchers documented breaks down this way, with the altiphotic/mesophotic inhabitants in yellow, the aphotic in purple, and the species unique to the rariphotic in green. 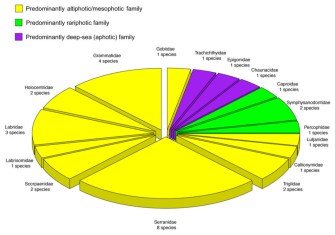 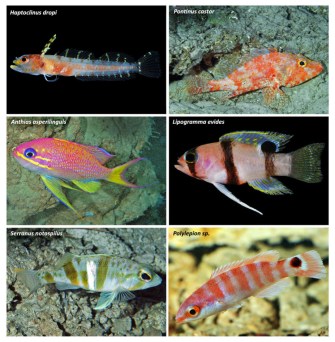 (Photo of Antheus asperilinguis by Patrick Colinby; all others photos by C.C. Baldwin and D.R. Robertson)
Related
Starts With A Bang
The sober truth about finding the Universe’s first stars
The Universe certainly formed stars, at one point, for the very first time. But we haven’t found them yet. Here’s what everyone should know.
Life
Our antidepressant drugs are affecting animals and ecosystems
A toxicologist explains the impacts of antidepressants on fish — and no, they’re not getting any happier.
The Past
Ancient migration: Bering Strait land bridge from Asia to North America was not a one-way road
Ancient humans crossed the Bering Strait land bridge from Asia into North America. But some of them went back.
Sponsored
Want to boost your happiness? Buy experiences, not material possessions
Some experiences continue to pay dividends time and time again.
High Culture
Did Paul Cézanne hide an early self-portrait underneath a 160-year-old still life?
To answer that question, we may have to figure out when the famed painter started to go bald.
Up Next
Personal Growth
What are the psychological dynamics when a couple tries to change a habit together?
Changing an unhealthy habit depends a lot on your belief that you can do it, something psychologists call self-efficacy. Take smoking, for example. Your belief that you are capable of […]