In one night, scientists were able to unlock another piece to the brain’s mysteries through crowdsourcing.

Researchers created a large-scale art-science installation called My Virtual Dream. Through this engaging interactive science experiment, researchers had participants lining up out the door to try it out when the installation was presented at the 2013 Scotiabank Nuit Blanche arts event in Toronto. This allowed researchers a rare opportunity, lead author Dr. Natasha Kovacevic explained in a press release:

“In traditional lab settings, the environment is so controlled that you can lose some of the fine points of real-time brain activity that occur in a social life setting.”

In this instance, the participants, which included 523 people ages 18 to 89, were told to put on a wireless electroencephalography (EEG) headband and play a game. Groups of 20 people were ushered into the 60-foot geodesic dome to take part in the collective neurofeedback experience. The EEG signals generated from the collective displayed on the dome’s interior, but outside factors, like the live music bands that could be heard from afar, influenced their signals. 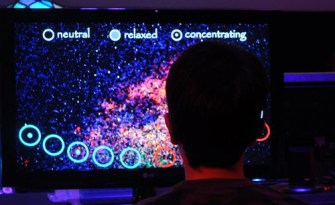 The game the participants played was one of manipulating mental states, where they had to shift between relaxation and concentration. The researchers found that the participants’ states were changing within approximately a minute of beginning the exercise — an unprecedented time.

The results of this project show how organic projects can help bring about astounding results, the likes of which a clean lab environment has never seen, in this instance.

“In conclusion, both confirmatory and novel findings from My Virtual Dream have provided necessary proof-of-concept for a novel neuroscience research framework.”

Read the full study at Plos One.

Philosophers have been making the claim that free will is an illusion for hundreds of years. Dr. Uri Maoz shares what modern neuroscience has to say about it.
▸
6 min
—
with
Dr. Uri Maoz
Up Next
Culture & Religion

What Happens When Everyone is Given Basic Income?

The Dutch city of Utrecht has set up an experiment to find out. Will everyone turn into lazy do-nothings or will people be encouraged to pursue passion projects?