Over the last decade or so it’s become increasingly obvious that the limits of battery technology are a pothole on our road to the future. It’s not even a new problem; scientists have been trying to invent better batteries since Edison. Whether we’re talking about storing clean energy, more practical electric cars, or maybe even just our dozing-off phones, battery issues are slowing progress w-a-a-y down. They’re not powerful enough unless they’re uselessly big and seriously pricey. They take a long time to recharge. And for keeping the devices we depend on up and running, they just don’t last long enough.

That is, at least, until researchers at theUniversity of California, Irvine (UCI) stumbled across a way to make ridiculously long-lasting rechargeable batteries. They’ve made a battery that takes 200,000 charge cycles, says, “Is that all you got?” and keeps going. That’s 400 times the charges that a lithium battery can handle.

They were as surprised as anyone. ”We started to cycle the devices, and then realized that they weren’t going to die,” admitted chair of UCI’s Chemistry department Reginald Penner in an interview with Popular Science. “We don’t understand the mechanism of that yet.”

Penner’s lab had been experimenting with replacing lithium with gold nanowires—they’re thousands of times thinner than a human hair and very conductive, with a large surface area for storing and transferring electrons. The goal was to make a solid-state battery, without the liquid lithium batteries contain that makes them overly sensitive to heat and combustible. Other researchers have experimented with using the nanowires before, but they’re fragile.

At UCI, PhD candidate Mya Le Thai got the idea of suspending the brittle nanowire in a protective electrolyte gel after coating them with manganese oxide. 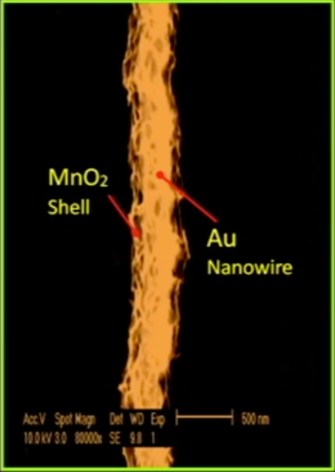 “Mya was playing around, and she coated this whole thing with a very thin gel layer and started to cycle it,” as Penner tells it. “She discovered that just by using this gel, she could cycle it hundreds of thousands of times without losing any capacity.”

Rechargeables usually die after 6-7,000 charges, so this is amazing. UCI suspects the gel makes the nanowire more pliable, and thus prevent the cracking that ended previous experiments. This could be the kind of battery-life breakthrough we’ve been waiting for.

Here’s the young scientist herself telling the story of this amazing leap forward.

Content not available
Related
The Learning Curve
Why do high IQ people stagnate in their careers? Emotional intelligence
Research suggests that emotional intelligence is more vital for success than IQ.
The Present
Even in the age of AI, some problems are just too difficult for computers
Computers are growing more powerful and more capable, but everything has limits
The Future
How the metaverse will revolutionize K-12 and higher education
Imagine going on a tour through the human circulatory system as a tiny cell. That is just one example of education in the metaverse.
Starts With A Bang
Ask Ethan: What are white holes, and do they really exist?
In General Relativity, white holes are just as mathematically plausible as black holes. Black holes are real; what about white holes?
Life
Strange life forms create an “alien” ecosystem in an abandoned uranium mine
Slimy biofilms made up of bacterial and eukaryotic life forms have taken over an abandoned, flooded uranium mine in Germany.
Up Next
Personal Growth
Do Children Benefit from Laptops in the Classrooms?
New research on student learning with technology and computers.