Advocates for a “healthier” alternative to cigarettes took another hit from a recent study published in the journal, Thorax. A number of previous studies have focused on e-cigarette liquid before being vaped. For this research, University of Birmingham coauthor Dr. David Thickett, a professor in the Institute of Inflammation and Ageing, investigated the effects on the lungs after inhalation.

Thickett and his team took tissue samples from eight nonsmokers to study the effects of the liquid over the next 48 hours. They discovered that the vapor causes the production of inflammatory cytokines, as well as the inhibition of a cellular “safety device,” phagocytosis. Simply put:

We show a significant increase in cytotoxicity caused by the vaping process itself.

Cytokines are a broad group of proteins that affect local cells. They are particularly critical in the functioning of the immune system. They help determine the body’s response to a host of potential issues, including cancer, sepsis, trauma, and, as this study shows, inflammation.

Vaping increases inflammatory behavior in lung tissue cells. It also decreases the efficacy of a process called phagocytosis, in which pathogens and cell debris are removed from the immune system. As the inflammatory cell response is increasing, the very mechanism that helps combat it is silenced. 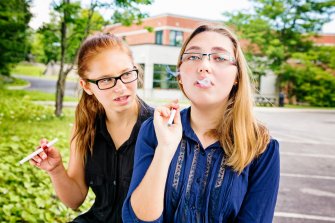 The popularity of vaping continues, however. In 2017, over one-quarter of high school seniors and 13 percent of eighth graders claimed they vaped. Research shows that college freshmen who vape are more likely to indulge in cigarettes as well. But when a company like Juul is valued at $16 billion, chances that we’ll slow down are slim.

And so the debate regarding the safety of cigarettes versus e-cigs continues. Thickett notes that there are still fewer carcinogens in the vaping liquid. In this sense, vaping appears safer than cigarettes. Yet Thickett says that in 20 or 30 years time, chronic obstructive pulmonary disease remains a real possibility for e-cig users.

I don’t believe e-cigarettes are more harmful than ordinary cigarettes. But we should have a cautious scepticism that they are as safe as we are being led to believe.

The authors of the study also note that they have not studied the flavors used in vaping liquid, which could promote further toxic effects. The lesson remains: nothing goes into your lungs without consequence. The question is how much of a risk you’re willing to take.

Psychologists are finding that moral code violations can leave an enduring mark — and may require new types of therapy.
Up Next
Innovation

How Simplicity Helps to Increase Innovation and Meaning

Simplicity is at the heart of some of the world’s most successful innovations. To some, simplicity is the concept of reducing complex concepts into simple messages, processes, services, or products. […]