Legislative plans are being proposed by the Russian Ministry of Health to prohibit the sale of cigarettes to anyone born after 2015. That means the next generation of Russian people could be permanently cut off from cigarettes.

Russian anti-tobacco efforts, instituted in 2009, with stricter legislation in 2013, are paying off. Bans were instituted on smoking in most public spaces like schools, hospitals, stadiums, as well as restaurants, hotels, airports and train stations. Other measures included raising taxes on the sale of cigarettes. This produced a reduction of a quarter in the total amount of smokers, going from 41% to 31% of the population. If planned measures are instituted, the percentage of smokers could drop as low as 5% by 2030, according to a Russian expert.

Whether the new idea to cut off sales to anyone born after 2015 will have legs is yet to be seen. A Kremlin spokesman indicated that such a ban can be considered but would need to be discussed with other ministries.  It should be noted that President Putin is a nonsmoker and generally projects a healthy, athletic image.

With the restrictive measures appearing to succeed, Russian health officials are skeptical of the spread of electronic cigarettes, with legislation introduced to ban them.

“It [the law] provides for a ban on advertising and sponsorship, and imposes restrictions on smoking in public places. Experts believe that the smoking ban in public places has made the biggest contribution to Russia’s falling tobacco consumption rate. That is why we are very cautious about the appearance of electronic cigarettes,” said a health ministry official to TASS. 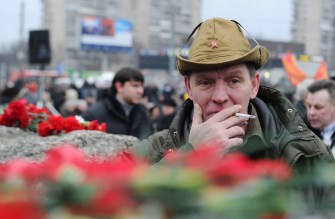 A former Soviet soldier smokes his cigarette near the monument commemorating the Soviet victims of the war in Afghanistan, in St. Petersburg on February 15, 2014. (Photo credit: VIKTOR DRACHEV/AFP/Getty Images)

About 300,000 to 400,000 Russians die every year from smoking-related diseases, according to the New York Times.

A man smokes at the Manezhnaya Square just outside the Kremlin in Moscow on June 1, 2013. (Photo credit: ANDREY SMIRNOV/AFP/Getty Images)

From corrupt czars to bloodthirsty Bolsheviks, Russia has had no shortage of bad leaders. But just how evil were they really?
The Past

A mineral made in a Kamchatka volcano may hold the answer to cheaper batteries, find scientists.
Health

It’s one of the nation’s worst oil spills on record.
Up Next
Strange Maps