Most “breakfast” cereals contain massive amounts of sugar, and even with a few cups of milk, they’re still … probably not as good for you as pizza. 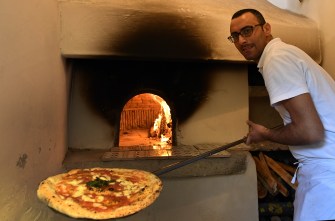 ITALY-UNESCO-PIZZA-NAPLESAn Italian ‘Pizzaiolo’ (pizza maker) prepares a Pizza Margherita in the first stone oven where was cooked a Pizza Margherita at the Capodimonte museum, on December 6, 2017 in Naples. Naples’ art of pizza twirling is a candidate to join UNESCO’s list of ‘intangible heritage’ and the city is waiting for the decision of the UN cultural body’s World Heritage Committee which is reunited in South Korean island of Jeju this week. / AFP PHOTO / TIZIANA FABI (TIZIANA FABI/AFP/Getty Images)

Leaving aside the sodium content — which is a big aside for those of us with high blood pressure — the fact that it’s carbs, protein, fat, and maybe a few vegetables makes for a much more balanced breakfast rather than one loaded with the potential to spike your blood sugar and then bring you crashing to the ground. Plus, comparing slice to cup of cereal, it’s about the same overall calories.

Registered dietician Chelsea Amer recently told The Daily Meal that “You may be surprised to find out that an average slice of pizza and a bowl of cereal with whole milk contain nearly the same amount of calories. However, pizza packs a much larger protein punch, which will keep you full and boost satiety throughout the morning.”

There is of course disagreement with the idea of doing this for breakfast as a regular thing. While a good old piece of Italian pie can seem to “soak up” the effects of a hangover or hold you over when you wake up famished, it’s still not exactly smart eating. At least, not regularly.

Melissa Rifkin, a bariatric dietitian at the Montefiore Medical Center in New York, says it’s still not a smart pick.

“While pizza can be a healthier choice per se, you may be giving most people an open window here of really amping up sodium, carbohydrates and fat early in the morning and setting oneself up for failure throughout the day,” she told Newsweek.

So … will that be a slice of deluxe or meat lover’s with your cuppa joe?

And here’s a lovely song about … what else? “Cold Pizza for Breakfast,” by Christine Lavin.

(Thumbnail image: Students Eat Lunch In The School CafeteriaNORTH HAMPTON, NEW HAMPSHIRE – OCTOBER 15: First grader Christina Muse takes a bite into a slice of pizza in the school cafeteria during lunch October 15, 2002 at North Hampton School in North Hampton, New Hampshire. North Hampton School has students from K through 8 and offer a balanced lunch menu everyday, some days even Dominoes Pizza is even served. (Photo by Debbi Morello/Getty Images))

Related
Starts With A Bang
The sober truth about finding the Universe’s first stars
The Universe certainly formed stars, at one point, for the very first time. But we haven’t found them yet. Here’s what everyone should know.
Life
Our antidepressant drugs are affecting animals and ecosystems
A toxicologist explains the impacts of antidepressants on fish — and no, they’re not getting any happier.
The Past
Ancient migration: Bering Strait land bridge from Asia to North America was not a one-way road
Ancient humans crossed the Bering Strait land bridge from Asia into North America. But some of them went back.
Sponsored
Want to boost your happiness? Buy experiences, not material possessions
Some experiences continue to pay dividends time and time again.
High Culture
Did Paul Cézanne hide an early self-portrait underneath a 160-year-old still life?
To answer that question, we may have to figure out when the famed painter started to go bald.
Up Next
Health
Need more meaning in your life? A new study suggests more sex might do the trick
Can’t find meaning in your life? A new study has the next best thing.