When tragedy strikes, we often look to comedians for perspective and, maybe, some relief. When ISIS attacked Paris on Friday, the world responded with grief, anger, shock, and solidarity with the French people. Still, our outrage wants an outlet. Holding in this confusion is uncomfortable. We know laughter relieves tension, that the best jokes work when tension is built and released. It’s ironic that the humor with the most power is the kind that arises from tragedy. 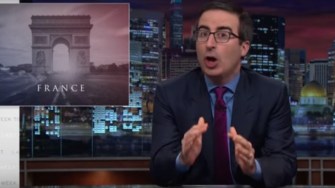 On Last Week Tonight John Oliver took advantage of his premium-cable status by saying, unfiltered, everything we were all thinking.

In a profanity-peppered take down, Oliver offered these words: “If you’re in a war of culture and lifestyle with France, good f*cking luck! Because go ahead, bring your bankrupt ideology; they’ll bring Jean-Paul Sartre, Edith Piaf, fine wine, Gauloises cigarettes, Camus, Camembert, madeleines, macarons, Marcel Proust, and the f*cking croque-en-bouche.” It was funny; it was angry; it was true; and we all collectively sighed in relief. We are not laughing about the tragedy; we are laughing about the absurdity of our world. Because we need to. We have to.

Oliver treated ISIS with the ridicule they deserved. It’s a sharp rhetorical weapon that minimizes an enemy:

There was a landmark moment after 9/11, when Saturday Night Live returned to the air. Jon Stewart and David Letterman had given us very heartfelt, emotionally wrenching and honest talks on their respective shows. Seeing your comedy idols so shaken, as grief-stricken as yourself, brought us all a sense of solidarity. But no one had made a joke yet, and it was unclear when we’d be able to laugh. Pundits had declared irony dead.

When Saturday Night Live came back, they opened with the NYPD, FDNY, and then-Mayor Rudy Giuliani on stage with Paul Simon. It was incredibly beautiful. Then producer Lorne Michaels asked Giuliani what we were all wondering: “Can we be funny?” to which Giuliani replied “Why start now?” The collective sigh of relief. I was 16 at the time, and I remember watching that show live, and whispering “thank you” through my tears.

We all know the trope “too soon,” and humor definitely needs to maintain a sensitivity around the events it is exploring. A study by the University of Colorado — Boulder researched when it becomes “okay” to make jokes about a tragedy, citing that about 36 days after Hurricane Sandy, humorous tweets relating to the hurricane overperformed. Time gives us distance, and distance lends us perspective. And who better to point us toward that perspective than the pied-pipers, the jesters, the wry and merry commentators?

No one knows what makes something funny, or why we have to laugh when we’re full of nervous tension. But we do know that it helps us understand the world just a little better when we can laugh about it. The ability to laugh, to create community around humor, to strengthen our culture and society by yukking it up — that’s something no one can take away from us. Stand with France; stand with Beirut; stand with Nigeria — as you stand against terror by looking it in the eye and saying, “You ever hear the one about…”

Machines Can See Through That Poker Face

Even if you have a good emotional mask, there’s a computer that can see through the cracks.