Anyone who’s taken any sort of physics knows that light can travel as photons or particles as well as waves. It may be hard to imagine, but under certain conditions, light can actually be turned into another form, a superfluid. In liquid form, instead of halting at an object and illuminating it, light flows around objects, just like water. This state is sometimes called the fifth state of matter or more formally, the Bose-Einstein condensate.

Light as superfluid has many strange and useful properties. For instance, it has no bends or waves, and experiences no friction or viscosity. As a result, this breakthrough could revolutionize any technology based on the transfer of light or electricity, and perhaps even launch the next generation of superconductors. Liquid light has been exceptionally rare up until now. It has only been seen under extreme conditions, in sealed lab chambers set to a temperature a few degrees above absolute zero.

Before, due to the need of such extreme conditions, its use wasn’t practical. Not only that, light would only exist in that form for a few fractions of a second. In this study, miraculously, scientists were able to achieve the same state at room temperature over a sustained period. The results were published in the journal Nature Physics. 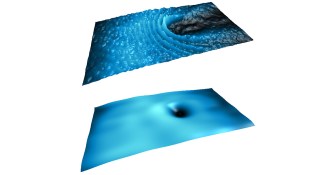 An international team of researchers worked on the project. They hailed from the CNR Nanotec Institute and the Università del Salento, in Italy, the École Polytechnique de Montreal, in Canada, Aalto University in Finland, and Imperial College London.

Daniele Sanvitto of CNR Nanotec was the lead researcher.He said, “The extraordinary observation in our work is that we have demonstrated that superfluidity can also occur at room temperature, under ambient conditions, using light-matter particles called polaritons.”

To create a “frictionless flow” of light, scientists took two special mirrors that were ultra-reflective. In between, they placed an extremely thin layer of organic molecules, just a 130-nanometers thick. They shot this with a laser pulse lasting 35-femtoseconds.

One femtosecond equals a quadrillionth of a second. This process allowed them to create a hybrid of light and matter. Instead of photons, you get polaritons. Stéphane Kéna-Cohen was the top Canadian researcher on this project.

He said in a statement,

Under normal conditions, a fluid ripples and whirls around anything that interferes with its flow. In a superfluid, this turbulence is suppressed around obstacles, causing the flow to continue on its way unaltered. Particles in this state behave like a single macroscopic wave, oscillating at the same frequency, and paradoxically combining the attributes of liquids, solids, and gases. 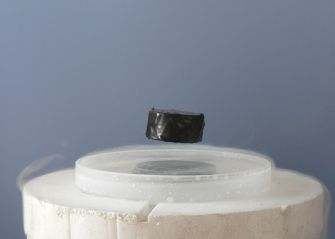 This discovery could lead to the next generation of superconductors. Wikipedia Commons.

The properties of polaritons are astounding. It combines the lightness and speed of a photon with the strong bonding power of an electron, giving the superfluid some really unique features. Light that can move superfast without waves or friction, could cause the field of quantum hydrodynamics, allowing it to take off in new and exciting directions.

Researchers from École Polytechnique de Montreal said in a statement that they were excited to work on the project, “Not only to study fundamental phenomena related to Bose-Einstein condensates, but also to conceive and design future photonic superfluid-based devices where losses are completely suppressed and new unexpected phenomena can be exploited.”

The breakthrough could revolutionize lasers, solar panels, computers, and even launch the next generation of superconductors. The study of superfluids may even help us solve some of the stubborn problems physics is coming up against, such as the mystery of dark matter. According to physicist Justin Khoury, it may in fact be a superfluid.

Non-Western thought is vast and ancient, so why don’t some consider it philosophy?
Up Next
Technology & Innovation

Achieving Your Goals Starts In Your Brain

Researchers at the University of Waterloo have connected inattention and giving up on your dreams.