It’s been a longstanding mystery: Spiders have been seen hundreds of miles out to sea and thousands of feet up in the air. They are amazing creatures, but flight per se isn’t one of their skills. And yet: A spider climbs to the top of a branch, releases a fan of silk, and off it goes. It’s called spider “ballooning.”

Charles Darwin found the phenomenon puzzling when he saw a swarm land on the H.M.S. Beagle some 60 miles offshore.

“A beautiful day: but the wind has been steadily against us.— In the evening all the ropes were coated & fringed with Gossamer web — I caught some of the Aeronaut spiders which must have come at least 60 miles. How inexplicable is the cause which induces these small insects, as it now appears in both hemispheres, to undertake their aerial excursions.”

The obvious explanation might be that their web catches the breeze and carries them away, but this notion doesn’t quite fly. Spiders balloon only in very light winds of less than three meters per second and wind couldn’t pull out enough silk to explain how they travel so far and get up so high anyway. A 1939 aerial collection expedition of the U.S. Department of Agriculture sampled high-altitude insects—calling them “plankton of the air”—and found substantial numbers of Araneida as high as 5,000 feet above Tallulah, LA.

Another idea was that they were somehow leveraging the Earth’s electromagnetic charge, but that idea had never been studiously tested. Now two scientists from the University of Bristol, Erica L. Morley and Daniel Robert, have shown that spiders balloon by taking advantage of the Earth’s electrical field.

The electric field around a tree

It’s been known since early in the last century that there is always an active atmospheric potential gradient (APG). On days with unsettled weather, the APG may strengthen. 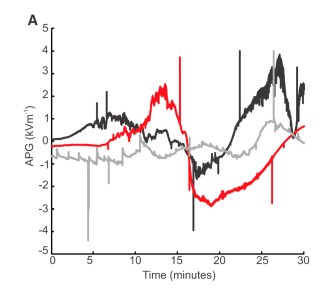 APG measured for 30 min periods across 3 days at the University of Bristol (Credit: Morley, et al)

If you have a grounded sharp object, such as a tree, rising into the APG, the electrical field, or “e-field,” around the tree can get quite charged. Close in around branch tips, sharp leaves, and needles, voltages can reach tens of kilovolts per meter.

Voltage scale bar, the e-field around an oak tree, the fields around its branch tips. (Credit: Morley, et al)

Spiders have fine mechanosensory hairs called trichobothria that are hypersensitive to sound and air motion. Morley and Robert placed spiders in an enclosed plastic box, positioning them on strips of cardboard, and exposed them to voltages similar to what they might encounter in nature—the researchers saw the trichobothria respond, “It’s like when you rub a balloon and hold it up to your hairs,” Morley tells The Atlantic. 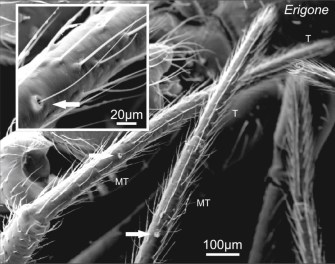 Just as interestingly, the spiders began to straighten their legs, raise their abdomens and release silk, called “tiptoeing,” when a voltage was present. The only time spiders tiptoe like this is just before they balloon.

What one might consider final confirmation of the theory would that when an e-field was induced in this utterly windless environment, the spiders actually began ballooning. When it was switched off, they came down. The researchers could actually control spiders’ altitude with electricity.

Morley and Robert conclude that the APG may serve three ballooning purposes:

They also note, “Several mechanistic questions now emerge, pertaining to the dielectric characteristics of ballooning silk and whether altitude control and navigation take place.” It may well be that spiders use both electricity and wind to balloon, with the APG getting them aloft, and wind currents allowing them to navigate.

Why does hearing sad music feel so good?
Up Next
Sex & Relationships

Lauren Groff: We should die of that roar

In her vivid, dreamlike new book of short stories, Florida is a humid, seething organism that wants to eat you. Snake-infested. Full of sinkholes. A thing to resist, get lost in, surrender to, and sometimes, temporarily escape.